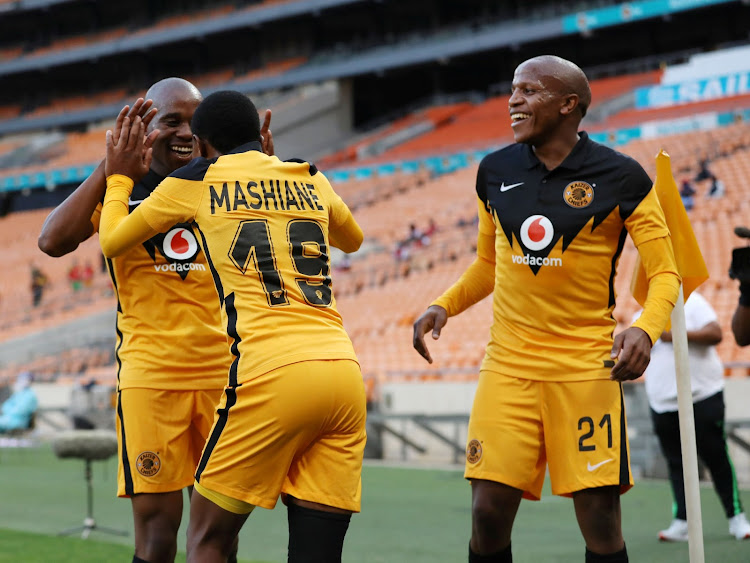 Happy Mashiane celebrates with his Kaizer Chiefs teammates after scoring his second goal in as many games as Amakhosi thrashed Tshakuma FC at FNB Stadium on January 19 2021.
Image: Muzi Ntombela/BackpagePix

Kaizer Chiefs are now on something of a roll – well, at the very least a mini-loaf – convincingly notching a third successive DStv Premiership win, 3-0 against Tshakhuma Tsha Madzivhandila at FNB Stadium on Tuesday.

Nkosingiphile Ngcobo struck a fine 19th-minute opener, and substitute Lebogang Manyama added a 66th-minute second with his first touch in an industrious victory to Chiefs.

TTM had centreback Alfred Ndengane sent off for a characteristic hack on Samir Nurkovic in the 83rd. In the final minute of normal time the substitutes who combined for Chiefs’ second – Manyama this time laying on for Happy Mashiane, who produced with an excellent finish – notched a third.

Gavin Hunt’s formative Chiefs have found physical presence and a work-rate closing spaces out of possession. Daniel Cardoso, Darrel Matsheke, Ngcobo – all starting on Tuesday – and substitute Njabulo Blom have been at the forefront of renewed muscle in midfield.

With the ball, Amakhosi’s movement up-front has been significantly bolstered by the return of the intelligent Nurkovic.

Hunt’s team are entirely a work in progress. They were entering a fixture against struggling team that, with bad press circling coach Joel Masutha’s side of players not paid, strikes, and being for sale, had slipped to second-last.

But Chiefs have found the going tougher at home and returning from their two wins on the road – 1-0 against AmaZulu then 2-1 at Cape Town City – a match that they were expected to win was just the kind of fixture where a team still finding solid ground might well have tripped. They were calm, controlled play, and took three good chances.

Hunt had said, while the youngster has been a starting favourite, he wants Ngcobo to start burying chances. The coach and player will be happy at a sudden return of two goals in two matches.

Chiefs had looked to start on the front foot as Cardoso showed a midfielder’s technique striking a volley powerfully from the edge of the area wide, but not by much.

The home team’s rhythm was disrupted as Ramahlwe Mphahlele pulled a hamstring, Blom coming into midfield in the 15th minute and Cardoso dropping to centreback.

Tshakuma appeared to be containing Amakhosi. But from a Kgotso Moleko throw-in from the right Nurkovic neatly brought the ball down, turned his marker, and lobbed for Ngcobo left in too much space on the left by marker Nicholus Lukhubeni. The SA Under-23 international beautifully touched wide, lobbed the challenge of Lukhubeni, and volleyed past Arubi.

Two young substitutes, Mashiane and Lebohang Lesako, combined for a half-chance soon after the break, the latter unable to stretch to the former’s delightful ball across goal.

Lesako appeared to injure something with the stretch and had to be replaced by Manyama. Seconds later Mashiane was played into space on the left from a free-kick, and squared, Manyama burying Chiefs’ second.

On another frustrating afternoon for TTM, Ndengane’s challenge saw the Limpopo team down to 10 men.  Manyama fed Mashiane through who banged in his second in two games from a tough angle. Then Parker’s rush of blood saw both sides finish with 10 men.