Coach praises Erasmus, Shalulile and Zwane, but says the team has plenty in reserve

More to Downs than trio of hotshots, says Komphela 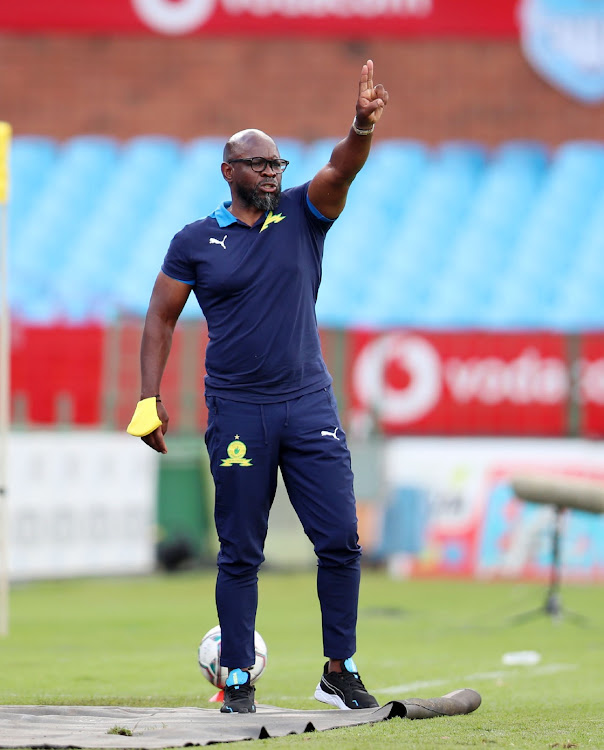 Mamelodi Sundowns senior coach Steve Komphela has suggested the Brazilians would be fine even if one of their in-form attacking trio was to be unavailable.

The trio – Kermit Erasmus, Peter Shalulile and Themba Zwane – now boast 11 DStv Premiership goals among them after Zwane was on the scoresheet in the 1-all draw away to Maritzburg United at the weekend.

Zwane’s 32nd minute strike at Harry Gwala Stadium, his sixth of the season, was cancelled by defender Kwanda Mngonyama on the hour mark.

“We’re highly dependent on our structure. We depend heavily on people operating at their positions and taking responsibility while they want to create chances or take them,” Komphela stated.

“Zwane has done that very well, also looking at [Haashim] Domingo trying his best, [Lesedi[ Kapinga making the difference, Lebo [Maboe] ... there’s whole a lot of them. But indeed we’ve had a great return from the trio of Erasmus, Zwane and Shalulile.”

Komphela, who gave his maiden post-match interview in the aftermath of co-coach Manqoba Mngqithi’s red card, maintained the club was not relying solely on the impressive trio.

“I think we’ve only played six [league] games and it’s a desperate comment for me to accept that it’s reliance on them [Erasmus, Shalulile and Zwane].”

The Brazilians senior coach almost admitted Middendorp had tactically outsmarted them. Komphela heaped praise on the way the German set his structure up in his first game in charge of Maritzburg.

"That’s exactly what he [Middendorp] did [overloading the midfield to prevent Downs from playing their usual style of penetrating directly],” noted Komphela.

“The space we wanted to create, we couldn’t. At the back of that you tried to manipulate the game and say: ‘Can we exploit the game via going wide?’ – because it becomes congested and you can say they were also aware of how we intended to enter their final third.”

Komphela added: “It’s typical of Middendorp, compliments must be given to him. That’s what coaches get paid for; thinking about manipulating the game to get an outcome.”

Mamelodi Sundowns were held to a 1-1 draw by Maritzburg United during their DStv Premiership match that was played at the Harry Gwala Stadium on ...
Sport
11 months ago

Kaizer Chiefs could only manage a 0-0 draw in the second leg at FNB Stadium on Saturday night to follow their 1-0 away win, which was enough for ...
Sport
11 months ago
Next Article