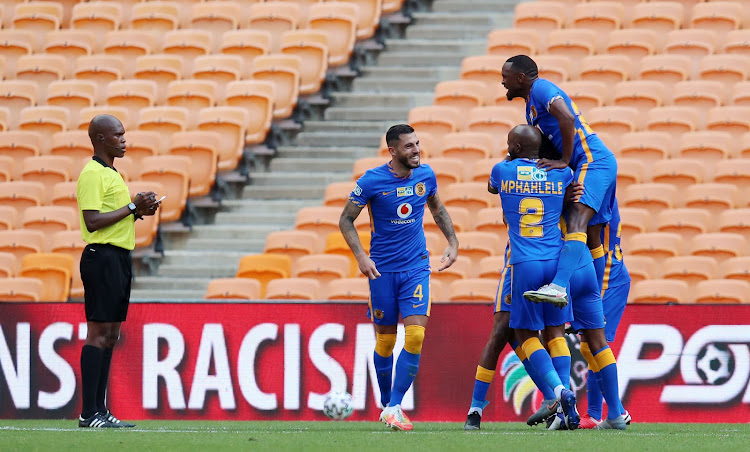 Yagan Sasman was voted man of the match after scoring both goals as Kaizer Chiefs came storming back from a goal down.
Image: Muzi Ntombela/BackpagePix

His arrival at Naturena last month was generously described as the closest thing to claiming the lottery by one ecstatic Kaizer Chiefs fan and new coach Gavin Hunt repaid the AmaKhosi devotee's faith in him when he delivered the winning jackpot numbers in his first day in the office on Sunday afternoon.

Chiefs had to work very hard for the victory in this tough MTN8 quarterfinal fixture against Maritzburg United and clawed their way back from a goal down to win 2-1 courtesy of a brace from man-of-the-match Yagan Sasman.

Hunt's charges had appeared to be struggling to shrug off the disappointment of losing the league title on the final day of the season in the previous campaign a few weeks ago and were lucky to concede just one goal in the first half.

A stray pass from Kearyn Baccus in the middle of the park rolled kindly for Keegan Buchanan and he graciously accepted the gift by delivering a perfect pass to Thabiso Kutumela who in turn beat Chiefs goalkeeper Itumeleng Khune with a low shot that sneaked into the far post in the 35th minute.

The goal had been a long time coming as the Chiefs rearguard had lived a charmed life for most of the first half and looked disjointed for the better part of the period.

Such was the disorganisation and confusion that there were times when they looked as if they met at the stadium tunnel a minute before the start of the match.

Maritzburg amused themselves for long periods during the opening period as they idly toyed with the home side as a cat toys with a mouse.

Daylon Classen was a constant menace and gift-wrapped a delicious pass to Bonngokuhle in the 43rd minute that seemed to heading to the roof of the net but was somehow denied by the crossbar‚ with Khune well beaten.

But things changed in dramatic fashion in the second half and Chiefs started the period with more purpose.

Hunt must have read his sleepwalking charges the riot act in the change room as they suddenly had a different look about them. The home side could have gone on level terms soon after the restart but Bernard Parker's rasping shot was denied by the upright after beating the visitors' goalkeeper Bongani Mpandle.

Chiefs got another opportunity to find the elusive equaliser when Khama Billiat created space inside the area and then teed up the ball for Njabulo Blom‚ but the second half substitute's snap shot was again kept out by the cross bar after a deceptive deflection.

The woodwork appeared to be conspiring to ensure a disappointing start to Hunt's tenure at Naturena until Sasman combined with Billiat to beat Mpandle with two goals in quick succession in the 73rd and 75th minute.

AmaKhosi are through to the semifinals of the tournament and will know the identity of their opponents after the draw on Sunday evening.

"I thought in the first half we were still in the bus‚ we were all over the show‚ we were pulled apart. But obviously I am still trying a few things which is difficult in a week and half " said Hunt in his first post-match interview with Supersport TV.

Chiefs still had traces of much vilified former coach Ernst Middendorp's DNA in their starting lineup‚ but this was understandable as they still have a hangman's noose hovering above them.

They have not been able to sign any players during the off-season as they are still awaiting the outcome of the Fifa ban appeal case they lodged and was heard by the Court of Arbitration for Sport [CAS] on September 9.

Chiefs were slapped with a two -window transfer ban in February 2020 by world governing body Fifa regarding the way they signed Madagascan player Andriamirado “Dax” Andrianarimanana.

Fifa imposed the ban on Chiefs after Amakhosi were found guilty of signing Dax in 2018 when the Madagascan already had a contract with Fosa Juniors in his home country.

They appealed the sanction and are now on tenterhooks as they await the outcome from CAS.