Seven defenders: Mosimane explains why he crammed Sundowns' back four against Chiefs 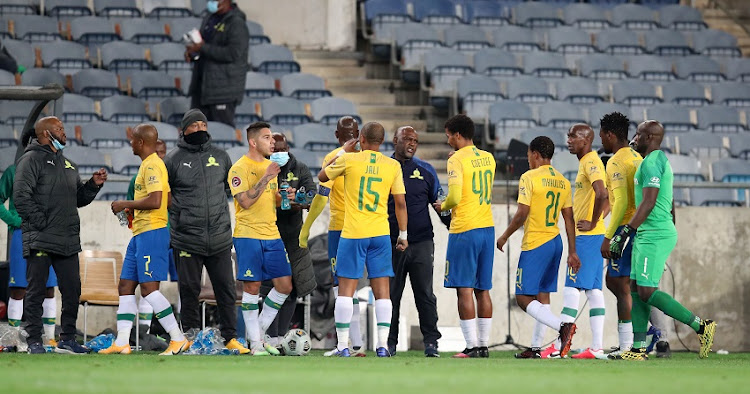 Mamelodi Sundowns coach Pitso Mosimane has explained his team’s unusual defensive tactics in the second half of their crucial 1-0 Absa Premiership win against Kaizer Chiefs‚ saying it was because Downs were under relentless pressure Amakhosi.

The Brazilians withstood consistent attacks from Chiefs for most of the second half to emerge 1-0 winners‚ leaving the two teams level on points at the top of the standings with three games remaining.

When referee Victor Gomes blew the final whistle at Orlando Stadium‚ Mosimane had three centrebacks on the field in the form of Mosa Lebusa‚ Motjeka Madisha and Wayne Arendse.

He also had two left-backs in Lyle Lakay and Tebogo Langerman‚ and two right-backs in Anele Ngcongca and Lebohang Maboe‚ which the coach said was to deal with the dangerous crosses from Chiefs.

In the midfield‚ he had two defensive midfielders in the form of Rivaldo Coetzee and Andile Jali‚ who replaced Themba Zwane after 65 minutes‚ in what turned out to be a defensive masterstroke.

“I had to double up Langerman with Lakay and Ngcongca with Maboe because we were under pressure‚” he explained.

“We went to Chiefs the first half and you are right to say we had two left-backs and two right-backs‚ because balls were being launched from the sides.

“If you play Chiefs‚ you look at the diagonal balls that they play behind. Samir Nurkovic and Leonardo Castro were not playing‚ but that’s their plan and that’s the way they play.

“They play diagonal balls that come from behind and if you don’t deal with that you will be in trouble. We didn’t want crosses to come but they still came‚ so we closed the sides to stop the crosses from coming.

“You have to respond to the question that is being asked and if they put three or four strikers what do you think I should do. The question was that there were people who are playing in the heart of my defence and we had to respond.

“It’s not what I want to play. Obviously they wanted to win the game and they were putting a lot of pressure on us and we have to respond.

“We can play modest football and say we don’t put people there at the back. But they had three people as strikers and they also pushed Eric Mathoho up-front – I had to respond.”

Mosimane pointed out that Sundowns’ Caf Champions League experience helped them to withstand all the pressure from Chiefs and claim all the three points.

“All the games in the bubble are difficult. It was a game that needed a different mentality and different attitude and Champions League experience.

“In my opinion‚ it was a game of two halves. It was a game that we let ourselves down a lot because we had a chance with Anele where he was supposed to have crossed in the box‚ Gaston who was one-on-one with the goalkeeper‚ had Lebo [Maboe] finished that ball in the second half we could have talked a different scoreline.”