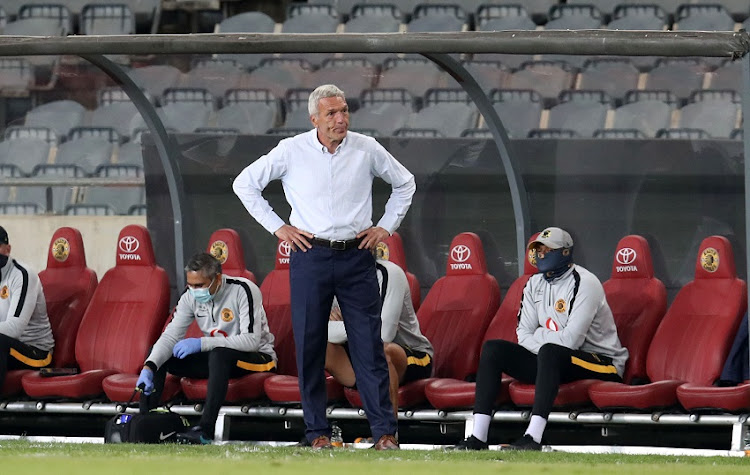 Kaizer Chiefs have "done an incredible job" being top of the Absa Premiership for almost the entire season‚ and that is what needs to give them confidence in Thursday's huge encounter against Mamelodi Sundowns‚ coach Ernst Middendorp has said.

Middendorp pointed out‚ as Chiefs face a potentially make-or-break match-up against Sundowns in the bio-bubble at Orlando Stadium‚ that virtually the same squad finished ninth‚ and a fourth season without a trophy‚ in 2018-19.

There is perhaps so much at stake in this game‚ though‚ that all that hard work for Amakhosi seeking what had seemed an unlikely league title at the start of 2019-20 in their 50th anniversary season‚ could just be undone against Sundowns.

Finally‚ after too many instances of the jitters from Chiefs in the second half of the campaign - including since the restart in the bio-bubble - second-placed defending champions Sundowns have an opportunity to draw level on points with Amakhosi with a win on Thursday.

Given the differences in experience - Sundowns are a trophy machine who know how to kill a season‚ Chiefs have not won silverware in five years - being level with three matches left would seem a tough place to come back from for Amakhosi.

"Mainly we are focused on our team - I think that's understandable‚" Middendorp said in his pre-match online press conference.

"And I should mention that the players have done an incredible job‚ considering the team is nearly the same starting XI that finished last season‚ being top of the PSL for nearly the entire season - 22 or 23 match days.

" ... It's my job at the moment to really go deeper into this squad we have available. To check out the selection of the starting XI who are available considering the injury status and fitness level.

"Considering what we have seen in this bubble‚ which is that there is quite a diversity in fitness levels between players for some reason.

"And of course we have to find the players who are capable of handling such an emotional event this Thursday.

"There are criteria of how we are capable of covering the distance‚ how we are able to follow the ambition we are setting.

"And of course bringing in a certain self-confidence based on what I said in the beginning that we have a position in this season being on top for nearly 100 percent of it.

"We have to be focused. We have to show the competitive attitude‚ in particular knowing what is at stake.

"But finally to sum up‚ we are excited. We are looking forward to having this game on Thursday and we cannot wait."

Chiefs were not given much hope in the away fixture in October‚ and a 2-0 win then at Loftus Versfeld was an early indicator that Amakhosi could challenge for the title in 2019-20.

The pressure is greater this time round‚ and Sundowns coach Pitso Mosimane has‚ with characteristic awareness of the psychology that surrounds matches‚ and how to manipulate that‚ pointed out that it is on Chiefs.

Overcoming such pressure in such matches is what makes or breaks a championship.

This also has the hallmarks of a match-up - as has been seen in the past few season - where Mosimane will push for a win‚ but happily settle for a draw‚ so long as the advantage is not handed to the rivals.