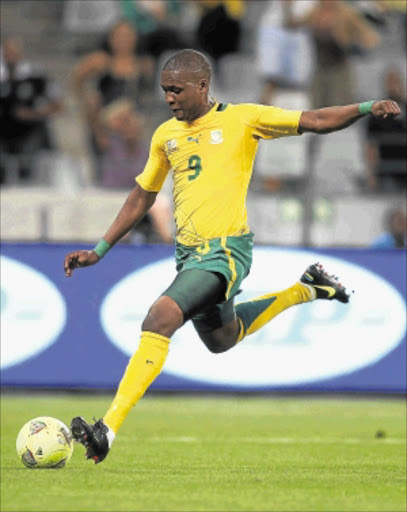 When the opportunity presented itself, Katlego Mphela grabbed it with both hands, grabbing most of the headlines in both the Confed Cup and World Cup.
Image: Gallo Images

As South Africans continue to share their fondest memories from the 2010 Fifa World, one of the star performers for Bafana remembers how he nearly missed the tournament.

Leading up to the World Cup, former Mamelodi Sundowns striker Katlego "Killer" Mphela was initially not earmarked for a place in the national team. In 2009, Mphela was not fancied to feature in Africa's first World Cup. At the time, Benni McCarthy, Terror Fanteni and Bernard Parker were the candidates that many thought would lead the attack.

However, prior to the Confederations Cup, McCarthy failed to honour a call-up for a Nelson Mandela Challenge match against Norway and Mphela was called in as a replacement. Needless to say, Mphela grabbed the opportunity with both hands and would star for Bafana in both the Confed Cup and World Cup.

"Remember, in the first place I wasn't supposed to be in the team that played in the Confederations Cup. I was selected at the last minute.

"So I just took my chance. People still talk about those two goals I scored against Spain in the Confederations Cup. I have many good memories from that period. We managed to bring the nation together and brought together people of all races," he said.

At the Confederations Cup, Mphela would be remembered for his two goals in the third- and fourth-place playoff against Spain, which the Europeans won 3-2.

At the World Cup, he also scored (with Bongani Khumalo) in the 2-0 win over France.

"Ten years down the line people still ask me about that experience. What happened before the World Cup was amazing," said the man from Letlhabile, Brits, in North West.

"The first game was nerve- wrecking, we were all very anxious because the whole world was watching."