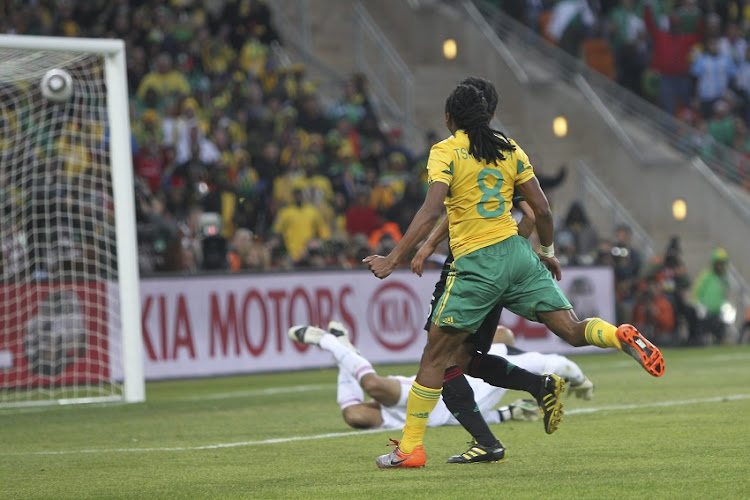 Thursday marks 10 years since Katlego Mphela hit the post in injury time having rounded Mexican goalkeeper Oscar Perez in the South Africa’s 1-1 draw against Mexico of the first World Cup on African soil‚ an effort which‚ had it gone in‚ would have seen the unfortunate hosts through the opening round.

Tshabalala said a heart-to-heart with head coach Carlos Alberto Parreira’s assistant Pitso Mosimane six months before the Mexico opener laid the ground for him being in form entering the tournament.

“Six months before the World Cup we played Japan in PE and I didn’t have a good game‚ and coach Parreira publicly criticised me – and it really hit me‚” Tshabalala recalled.

“In January‚ on the first day of our camp in Brazil I had a long one-on-one with Pitso. He was very harsh and his usual self‚ expressing how he felt with regards to my performance.

“I listened to him‚ even though it hurt me and I went to bed very disappointed. But I took it positively. And from that moment I worked very hard on and off the ball‚ and at training.

“And out of the six games we played in Brazil I think I scored in five. And from there I never looked back – we went to Germany and I did the same.”

Watching replays of the goal‚ it strikes one that in the disappointment of their first round exit not enough credit is given to Bafana for the quality of their performances in 2010.

After an understandably nervous opening 45 minutes‚ Bafana’s shape was superb as they tormented an overly high-pressing Mexico in the second half.

That structure led to the intercept that then led to the perfectly applied counterattack from a team whose ball-playing ability especially in midfield has not been often enough recognised‚ and ultimately Kagisho Dikgacoi’s perfect pass for Tshabalala’s run and dream finish.

“June 11 I was nervous‚ like any other game. If you were to play a friendly game you would still get nervous. But I was really touched by the crowd and the support‚” Tshabalala recalled.

“I still remember the moment when I sang the national anthem. I sang it with pride and teary eyes as well.

“And I was very positive. I knew that I was going to do well. Because I visualise all the time. I dream‚ I plan‚ I execute my plan‚ I dominate and then I repeat again. So it was no different from that.

“Obviously it was a big stage – the whole world was watching‚ and one had to bring his ‘A’ game.

“So it didn’t just come by fluke‚ the goal as well. Mexico were in possession‚ and we were well organised‚ everyone back to our half.

“And I think Aaron [Mokoena] intercepted the ball‚ it changed hands from Kagisho‚ ‘Yeye’ [Reneilwe Letsholonyane]‚ and Katlego [Mphela] as well.

“It was a perfect transition‚ perfect run‚ the weight on the ball and the speed from ‘KG’ [Dikgacoi] was perfect‚ my first touch was good and I also felt it when the ball left the boot that it was definitely going to go in.

“And the celebration should also tell you that it came from confidence that we knew we were going to score.

“The celebration was well prepared. Everything was great. So it was a perfect goal.”

Following the draw against Mexico Bafana capitulated 3-0 to Uruguay.

That night at Loftus Versfeld‚ even with the mastery of player of the tournament Diego Forlan‚ the hosts were still only 1-0 down when Luis Suarez dragged a foot to have Itumeleng Khune sent off and set up Forlan’s second from the spot in the 80th.

Alvaro Parreira’s third in the 95th made for a scoreline that flattered the eventual semifinalists.

Against France the South Africans had a 2-0 half-time lead needing a 4-0 win to progress‚ and Mphela hit the post again‚ then Florent Malouda scored to end South Africa’s World Cup dream in Bloemfontein.