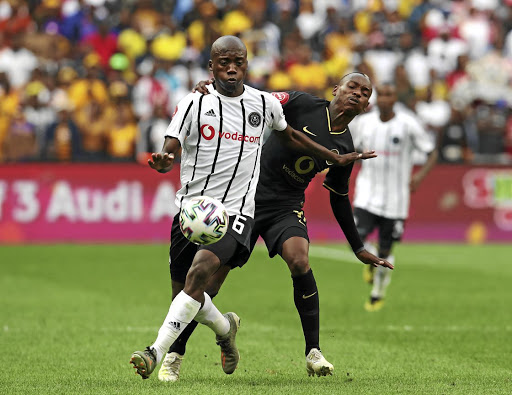 Ben Motshwari of Pirates is challenged by Khama Billiat of Kaizer Chiefs during their Absa Premiership match at the FNB Stadium in Soweto on February 29. He was the first PSL star to be diagnosed with Covid-19. / Muzi Ntombela/BackpagePix

Orlando Pirates midfielder Ben Motshwari has completed his two weeks mandatory self-isolation and will soon conduct another test to verify if he has recovered from the novel coronavirus.

It was two weeks ago, on May 7, that Pirates announced that Motshwari has tested positive for Covid-19. Motshwari became the first local footballer to test positive for the virus.

His agent Palesa Mkhize expects the club to make an official update on whether the players is in the clear.

"Ben was waiting for the doctor to make an appointment for another test. We will only know after if he has fully recovered," Mkhize told Sowetan this week.

"When I spoke with him I could sense that he is strong and coming along nicely. I didn't get any bad vibes that suggested that he was not well.

"But the club will make an announcement on the official update. It is not my place to speak about or talk about these things."

In its statement at the time, the club said: "The player is asymptomatic and is currently in-home isolation for the next 14 days.

"He will need to test negative before he is cleared. In accordance with relevant protocols, NHI has been notified of the case by the club."

Mkhize praised the club and the department of health for the superb medical care his client has been receiving.

"He has been keeping in touch with the medical staff and the club has been taking good care of him."

Motshwari's positive result was a clear indication that the Premier Soccer League (PSL) would need to test players on a mass scale if games are going to resume.

Discussions between the PSL and Safa are currently underway about when games can resume.

Clubs could return to training as soon as the beginning of June and games could resume in late June, according to rumours.

Orlando Pirates midfielder Ben Motshwari‚ who tested positive for Covid-19 last week‚ said on Monday he is “doing quite well under the circumstances” ...
Sport
2 years ago

News of Ben Motshwari contracting Covid-19 has increased fear and anxiety among some players in the Premier Soccer League (PSL).
Sport
2 years ago

Sundowns coach Mosimane to Pirates' Motshwari: 'You have strength to withstand this virus'