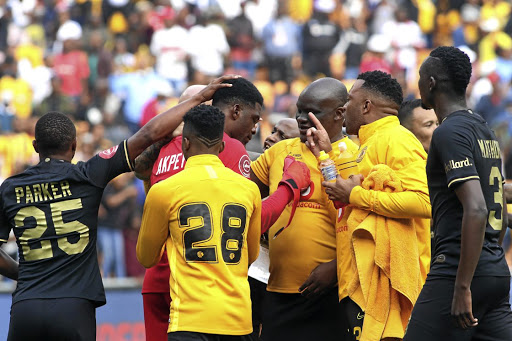 Kaizer Chiefs goalkeeper Daniel Akpeyi is mobbed by teammates, including Itumeleng Khune, after their win over Orlando Pirates at FNB Stadium, where Akpeyi was man of the match. /ANTONIO MUCHAVE

Kaizer Chiefs goalkeeper Daniel Akpeyi has advised agitators that their attempts to create a rivalry between himself and Itumeleng Khune are not working.

Almost this entire season, the raging debate has been about who should be number one at Naturena between Akpeyi and Khune.

Last week ahead of the Soweto derby, the talk had been about who should start against Orlando Pirates. In the end, the Nigerian got the nod and delivered a virtuoso performance to help his team win 1-0.

"In our goalkeeping department, we are all very close. It's just unfortunate that people want to put me up against Khune. We are pushing each other and we are brothers," Akpeyi told Sowetan.

"We just told ourselves that we are family and should stand together at all times. We will not allow anything to divide us. That is why at the end we all celebrated together.

"I assure you that if Itu, Bruce Bvuma or even Bontle Molefe was called upon, they would have put up a brilliant performance."

With only nine games standing in their way of winning the Absa Premiership, the 33-year-old has vowed to deliver more such performances.

"I can say my best is still to come. It was one of those games where everything worked out for us. I also hope that in the other coming games can also get the best out of us," he said.

"Our aim has always been about winning the championship. We didn't begin the season just to be spectators."

Akpeyi also thanked coach Ernst Middendorp for having faith in him in tough times.

"It was a great feeling to get the backing from the coach. My job was just to help my team after two consecutive losses going into the derby."

Chiefs will next face the struggling AmaZulu at the FNB Stadium on Saturday (8.15pm).

Kaizer Chiefs coach Ernst Middendorp has kept to his original word by starting Nigeria No 1 Daniel Akpeyi between the posts in the huge Absa ...
Sport
1 year ago

Kaizer Chiefs took an early lead at the half-way mark of their Absa Premiership encounter against arch rivals Orlando Pirates on a wet Saturday ...
Sport
1 year ago
Next Article