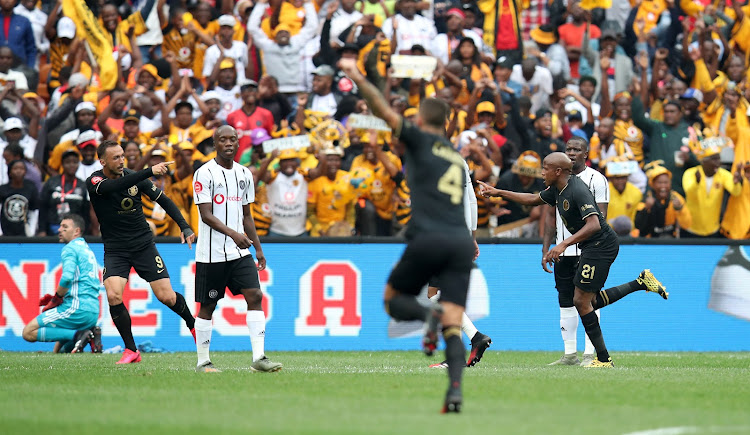 Lebogang Manyama of Kaizer Chiefs celebrates goal during the Absa Premiership 2019/20 match between Orlando Pirates and Kaizer Chiefs at the FNB Stadium, Soweto on the 29 February 2020.
Image: ©Muzi Ntombela/BackpagePix

Goalkeeper Daniel Akpeyi was spectacular between the posts as Kaizer Chiefs managed the portions of the game they needed to, and kept a dangerous Orlando Pirates at bay for a crucial 1-0 Absa Premiership victory in Saturday’s Soweto derby at FNB Stadium.

Lebogang Manyama’ 31st-minute strike came in a middle period of the game where Chiefs were dominant in a rousing derby in front of 90,000 supporters.

Pirates probably had more chances over the 90 minutes. Akpeyi was monstrous denying them.

Chiefs coach Ernst Middendorp, in a remarkable statistic, remains unbeaten in eight derbies for Amakhosi against Pirates in his two stints, having won four outright, won two on penalties, and drawn two.

Amakhosi could not have asked for a better way to bounce back from what seemed a costly home defeat against Maritzburg United than a derby win. And especially in a derby where the script was for them to crack under pressure and lose the game, and also their grip on their league lead, against in-form Pirates.

Some cracks did show in Chiefs shaky fortnight, where they also exited the Nedbank Cup on penalties to Highlands Park. But at some stage, some credit must start going to Middendorp for this improbable title chase that continues to defy the odds from Amakhosi.

It was a masterstroke from Chiefs’ coach to persist with Akpeyi over Khune in the league. Had the decision backfired, he would have been castigated. The Nigeria No 1 was breathtakingly good.

Chiefs dominated on either side of the break. Josef Zinnbauer’s exciting, unfortunate Pirates looked for all the world like scoring in the opening 20 minutes, and then especially an torrid last half-hour to Chiefs.

Amakhosi’s resolute defence, and Akpeyi, held on at times by a tether to stop Bucs.

Pirates should have scored on 15 minutes, denied by Akpeyi. Thembinkosi Lorch’s cross from the left found Luvuyo Memela on the far side to head back in, where Akpeyi excellently smothered Gabadinho Mhango’s point-blank header.

The action was immediately intense and end-to-end, both teams also holding the other in defence, as Lorch managed a shot into the arms of Akpeyi.

Chiefs were at full stretch to this new, dynamic attack of Pirates. But Amakhosi recovered to work the ball up-field more. Manyama’s free-kick put George Maluleka down the right to shoot into the netting.

Then, receiving a pass from Samir Nurkovic, Manyama ran through space down the middle and a low, powerful, expert finish from the edge of the box beat Sandilands and lifted the FNB roof.

With Pirates silenced, Manyama ended the half with a free-kick onto the top netting.

Middendorp brought on Billiat for Leonardo Castro 14 minutes after the break for his ability to trouble Pirates with skill, and no doubt to hold the ball up.

Within minutes Billiat was played through on the right, and had an option for a shot but unsuccessfully tried to find Manyama instead.

If Pirates had wanted to come out lifting the tempo after the break, they instead continued to look low in ideas, and Amakhosi’s intensity kept Bucs pinned back. From Manyama’s cross, Erick Mathoho put his free header over.

But then Bucs found full throttle as Akpeyi, good until then, entered the category of sublime with a remarkable triple save. Two stops were to shots at point-blank, the second from on the ground, from Luvuyo Memela and Mhango, then the keeper got up for a third from the loose ball from Lorch.

Form the corner Vincent Pule rolled a shot inches wide across the face. Akpeyi athletically stopped from Lorch in the last 10 minutes.