Chiefs coach Middendorp's goalie conundrum: Will it be Khune or Akpeyi in the Soweto derby? 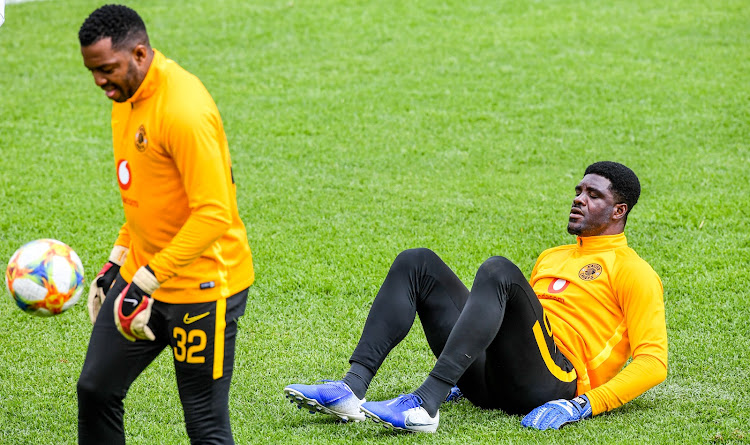 Itumeleng Khune has struggled to win back his number one jersey from Nigerian teammate Daniel Akpeyi.
Image: Sydney Seshibedi/Gallo Images

Kaizer Chiefs coach Ernst Middendorp says he has not made a decision yet on who will play at goalkeeper between Daniel Akpeyi and Itumeleng Khune in Saturday’s Absa Premiership Soweto derby against Orlando Pirates at FNB Stadium.

Having previously said Bafana Bafana No 1 Khune will play in the Nedbank Cup‚ and Nigeria No 1 Akpeyi in the league‚ Middendorp on Thursday went as far as to say Khune may well be between the posts in a potentially hugely crucial derby on Saturday.

Middendorp was asked about a recent poll where the public voting favoured Khune between the posts on Saturday.

“I absolutely always put it into the process of decision-making. But it’s always something where we have competence within our technical team to find a solution.

“I understand fully a certain emotional attachment into a certain type of player‚ and I really respect it.

“And probably he [Khune] is on the field. Why not? It’s one option.”

Asked‚ for clarification‚ if that means a decision has not been made yet‚ Middendorp replied: “No‚ no‚ no. Today is Thursday.”

Akpeyi has been in form in Chiefs establishing a lead at the top of the Premiership.

But the Nigerian made a crucial error that led to Daylon Claasen’s first of two goals in two minutes as Chiefs lost 2-1 at home to Maritzburg United a fortnight ago.

That result has put the league leaders under pressure‚ seeing their points gap slashed from nine to four.

Khune has recently returned from long-term injury‚ and has played in the Nedbank Cup.

The Bafana stalwart‚ before two injury-ravaged seasons‚ had sometimes carried a struggling Chiefs in their unprecedented past four seasons without a trophy.

So it is no wonder his return has resulted in calls from many Chiefs fans for his inclusion.

It is not as simple a decision as that though.

Khune remains a class‚ solid keeper‚ with world-class distribution skills. He appears to have lacked some energy controlling his area‚ though‚ from his large periods of inactivity.

Hot music and entertainment like-up by @orlandopirates
Get there early. Gates open at 11h30

He has been a physical‚ energetic and athletic presence in goal for Chiefs. But that question mark over the Nigerian’s tendency for the odd match-costing error was raised again by what happened against Maritzburg.

“It’s a very tough decision. Everybody should respect in the end the decision. And that’s it. And‚ ja‚ good‚” Middendorp said‚ somewhat cryptically.

Chiefs have wobbled with their defeat to Maritzburg‚ which was followed by Saturday’s penalties Nedbank Cup exit against Highlands Park at a rain-drenched Makhulong Stadium.

Pirates‚ in contrast‚ have been in rampant form under Middendorp’s German compatriot Josef Zinnbauer‚ winning seven and drawing one league game in eight to become title dark horses.

Bucs can reduce the gap to three points‚ having played a game more‚ and establish genuine title credentials that would have been unimaginable as they floundered in the first half of the season.

The stakes in a Soweto derby have not been so high for some time.