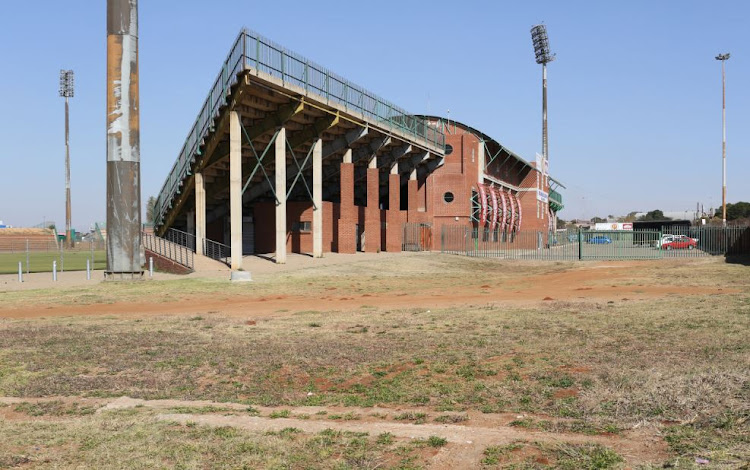 The are at Makhulong Stadium where Outside Broadcast vans park is not paved.
Image: Thapelo Morebudi

The City of Ekurhuleni has defended its failure to deliver on a commitment made in June to upgrade Makhulong Stadium by January this year.

The Tembisa-based stadium is home to premiership club Highlands Park who have‚ with no success‚ consistently implored the municipality to upgrade the facility.

The City’s MMC for sport‚ arts and recreation Dora Mlambo and the then head of department Vincent Campbell did an oversight visit at the stadium in June last year to see with their own eyes the upgrades that are required at the stadium.

Following the visit‚ the municipality promised the people of Tembisa and the club that the stadium’s inadequacies would be attended to and then set a January deadline to have the facility upgraded.

Despite the visit and subsequent commitments‚ the stadium has still not been upgraded. 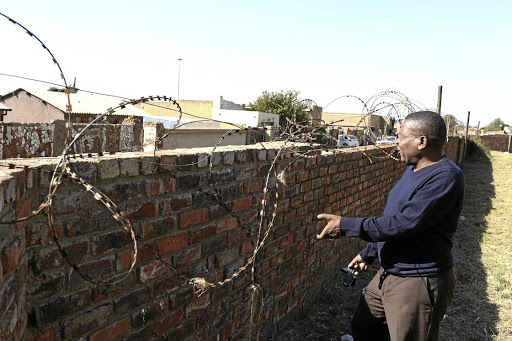 Highlands Park director Sinky Mnisi showing the short wall around Makhulong Stadium. The perimeter wall around the stadium is so low it is easy for fans to scale during high risk matches.
Image: Thapelo Morebudi

In a statement to SowetanLIVE issued by communications and media relations divisional head Nhlanhla Cebekhulu‚ the municipality admits to its failure to meet its own deadline.

“The Department was not allocated these funds (to upgrade Makhulong Stadium in the last financial year) and therefore plans are afoot to include this request (to make funds available for the upgrades) in the next financial year plan‚” the city said in a statement to SowetanLIVE.

Highlands have previously repeatedly complained to the municipality over the inadequate facilities at the stadium.

The club gets away with hosting matches against smaller teams but it becomes a different story when the likes of Kaizer Chiefs visit with the club having already bemoaned about the extra security-related costs they incur when hosting high-risk matches.

The stadium’s VIP and media area that hosts journalists‚ club officials‚ guests‚ and players from both sides who are not on their matchday squads are not barricaded from the general spectators. This compromises the safety of players‚ officials and guests. 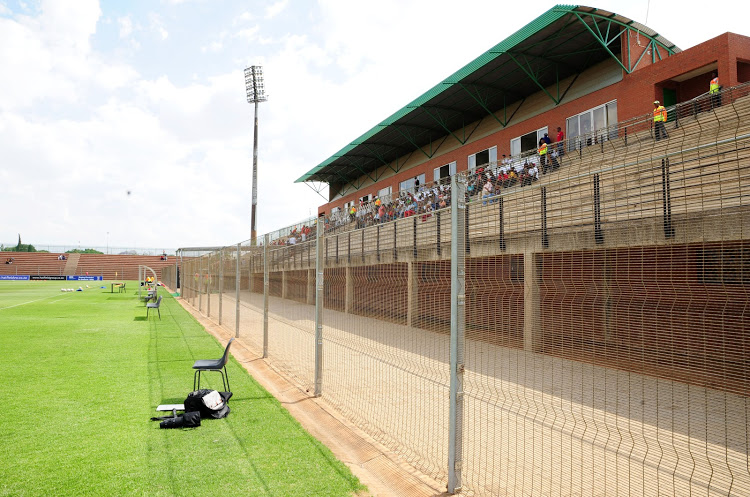 The main grand stand has no cover to shelter the spectators‚ the players‚ media‚ officials and guests who are left exposed during inclement weather or on hot and windy days.
Image: Aubrey Kgakatsi/BackpagePix

A stretch of an arm is all it takes for a supporter to make contact with working journalists and commentators.

The main grand stand has no cover to shelter the spectators‚ the players‚ media‚ officials and guests who are left exposed during inclement weather or on hot and windy days.

The perimeter wall around the stadium is so low it is easy for fans to scale during high risk matches.

Fans have been seen overpowering security and climbing over walls to get into the stadium during visits of Chiefs‚ Orlando Pirates and Mamelodi Sundowns.

The municipality‚ despite committing to the upgrades in June last year‚ claimed to have failed to make funds available for the upgrade of the stadium during its budget allocation.

“To raise the outside perimeter wall‚ pave the parking area for the Outside Broadcast vans and install a permanent back- up generator – this was subject to the availability of funds which was to take place in the January budget adjustment period‚” said the municipality. 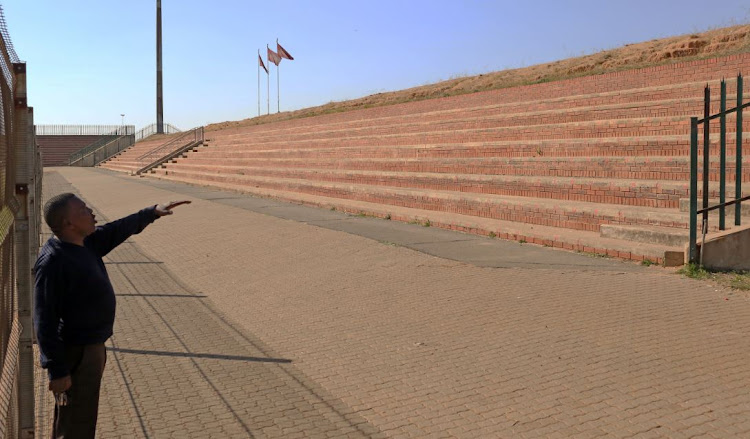 “The Department was not allocated these funds and therefore plans are afoot to include this request in the next financial year plan.”

In response to the stadium not having back up generators in cases of load shedding and lifts for disabled officials and supporters‚ the municipality said: “It must be noted that during games a standby generator for emergency evacuation is always provided.”

The club has previously cautioned and warned that hosting Chiefs in the current dire state the venue is in was an accident waiting to happen.

The accident duly happened at the weekend in the east rand township when rain started pouring down in the second half of a sold-out Nedbank Cup between hosts Highlands and Chiefs with the stadium packed to the rafters. 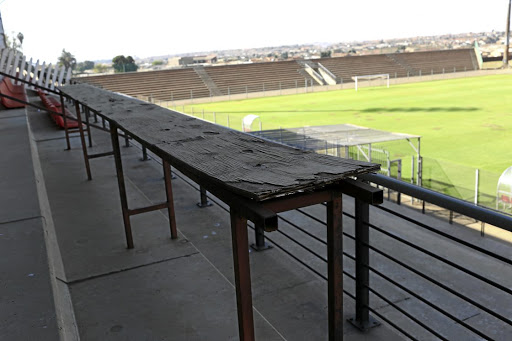 The City of Ekurhuleni merely replaced these worn out tables and replaced them with new ones and claimed it as part of its upgrades done at Makhulong Stadium. This is what journalists have to deal with at the stadium.
Image: Thapelo Morebudi

Pandemonium broke in the stands as fans ran for cover in the VIP and media zone during the unexpected rain‚ compromising the players and official’s safety.

As fans looked for shelter in the open grandstand‚ the media area occupied by radio‚ print and television reporters became their only option to run to.

Live SABC radio broadcasting ceased immediately to operate and television commentators survived because they were sheltered right inside the working area.

The likes of Chiefs left-back Siphosakhe Ntiya-Ntiya and other players who were watching from the stands found themselves squeezed among the fans who invaded their area while looking for shelter.

Highlands directors and shareholders including senior Premier Soccer League officials who were present were left embarrassed by the chaos.

Highlands director‚ Sinky Mnisi who last year threatened to move the club out of the east rand township if the City did not provide financial services to the club and upgrade the facility‚ said he hopes the municipality can attend to the issues urgently.

Mnisi said he was happy with the fact that some of the municipality’s officials were present during the chaos to witness the situation themselves.

“Considering the people on the ground‚ they had to run for shelter.

"I am happy that some of the dignitaries who were there were coming from the municipality‚ they have seen what has happened.

"My take is that they should speed up the process of fixing the facility in terms of putting cover for the benefit of our supporters.

"I think we have learned our lesson and also the municipality‚” said Mnisi. 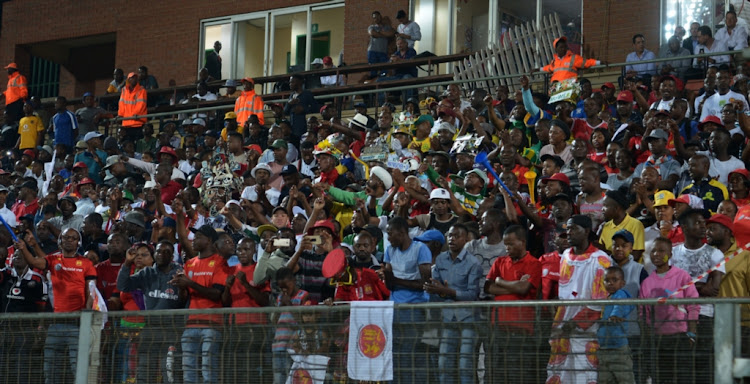 A stretch of an arm is all it takes for a supporter to make contact with working journalists and commentators.
Image: Gallo Images

Premier Soccer League chief operating officer Ronnie Schloss who was present at the match‚ said they would discuss the incident and decide on what needs to be done.

Schloss said the big problem is the inadequacy of the facility.

“The roof doesn't protect any of the spectators on the west side and the controls or the fence to stop people from getting into the VIP section are very basic.

“By the time we got security up there‚ people had already gained access to the VIP area and press area.

“This affected the press being able to do their work‚ especially those who were broadcasting live as they had to terminate their broadcast‚” Schloss told SowetanLIVE.