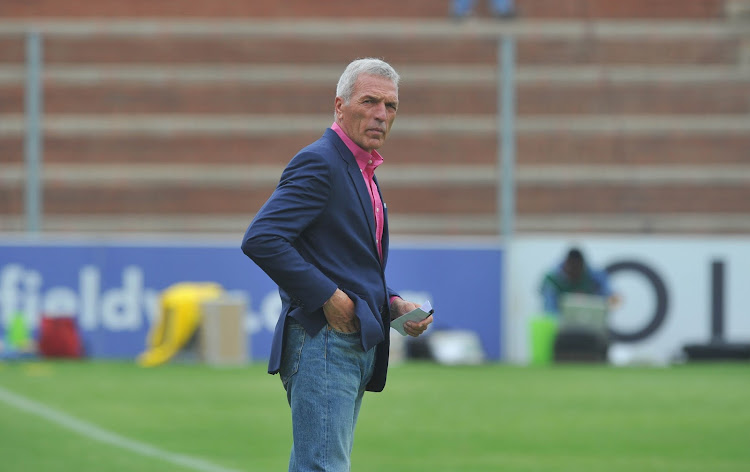 Increasingly pressured Kaizer Chiefs coach Ernst Middendorp has bemoaned “a run of unfortunate decisions” against his team since the beginning of the year as the formidable lead his charges once enjoyed continues to be shredded with each passing week.

Chiefs started the year seven points clear at the top of the Absa Premiership standings but an away 2-1 defeat to SuperSport United in their first match of the new year gave the chasing pack reason to believe.

Amakhosi‚ however‚ bounced back from that defeat with a four-match unbeaten run that included three wins and a draw.

But another defeat‚ this time at home to Maritzburg United on February 15‚ once again stopped their campaign dead in its tracks and the knockout blow they received away from home at Highlands Park in the Nedbank Cup via penalties at the weekend turned their season from ecstasy to agony.

Middendorp said SuperSport‚ Maritzburg and Highlands Park benefitted from poor officiating in their wins over Chiefs.

“It is a run of unfortunate decisions if you start from the game we lost against SuperSport United in the league‚” Middendorp told the club’s official website.

“We lost against Maritzburg United last week and judging by the reviews‚ we were denied the penalty that could have changed the game.

“We will take it in the spirit of football and move on. We will remain calm‚ keep our focus and prepare for the next match‚” said Middendorp.

Chiefs’ face arch rivals Orlando Pirates next at FNB Stadium on Saturday at 3pm. Their title run-in could turn into a nightmare if they fail to get a result against a resurgent and rampant Pirates.

Middendorp watched in disbelief as Chiefs crashed out of the Nedbank against Highlands at a wet and windy Makhulong Stadium in Tembisa at the weekend.

In the same game‚ in the first half of extra time and with the pitch waterlogged and players losing their footing more often than not‚ substitute Dumisani Zuma appeared to have been hacked as he went down inside the box under a challenge.

But referee Jerry Chavani waved play on with the score at 1-1.

“Both teams played under unfavourable conditions‚” says Middendorp of their game against Highlands.

“We struggled a bit to adapt but I thought we could have been awarded a penalty during extra time when Dumsani Zuma was tripped with a clear chance to score.”

“It was one of those games where we did everything to win but it was not to be‚” reflects Middendorp.

“Highlands Park brought their A-game to us and we couldn’t unlock them to create enough chances to score.”

Chiefs lead Pirates by six points but have played a game less while defending champions Mamelodi Sundowns are breathing heavily down their neck four points behind.