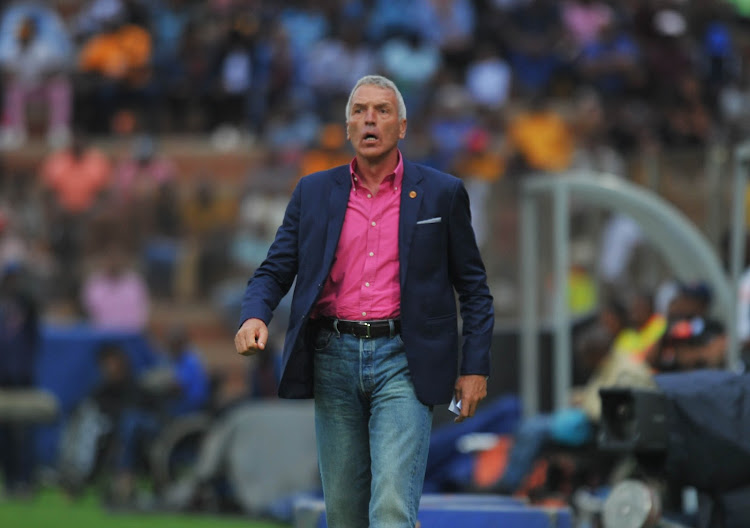 Ernst Middendorp is under immense pressure to win the league.
Image: Sydney Mahlangu/BackpagePix

Chiefs were beaten 5-4 on penalties by Park at a Makhulong Stadium swept by a torrential downpour in the second half on Saturday‚ after normal and extra time ended 1-1.

After their last-16 cup defeat‚ they meet arch-foes Pirates in the league next at FNB Stadium on Saturday at 3pm.

Amakhosi now have just the Premiership to play for‚ attempting to reverse their four previous seasons without a trophy.

Chiefs are also desperate for silverware in their 50th anniversary season.

On top of that‚ Chiefs also need to send a message to opponents that the cracks are not starting to show following a fortnight where their lead was cut from nine to four points‚ and where they were booted out of the season’s last cup competition.

“The next game is next Saturday and we need to be concentrated as much as possible on that‚” Middendorp said.

“We know it’s a game with a high attendance‚ and of course there’s a huge result at stake‚ and we are aware of that.

“It’s always something where were are disappointed [about the Nedbank defeat]‚ there’s no doubt about it. But‚ under the circumstances it was not really a game that we could see [to playing with any authority] from our side.”

The cup game on an already uneven Makhuloing surface‚ against physical‚ spoiling Highlands‚ was made even more difficult by the second-half downpour.

Chiefs have a four-point lead over defending champions Mamelodi Sundowns in the PSL‚ and six over third-placed Pirates.

Hungry Lions coach Henry Basie says his side are determined to defeat Baroka FC in their Nedbank Cup last-16 clash at Peter Mokaba Stadium on Sunday ...
Sport
1 year ago

Sundowns might be recent African champions, but that has not stopped VUT coach Stanley Nkoane spitting fire on his team’s chances against the ...
Sport
1 year ago
Next Article