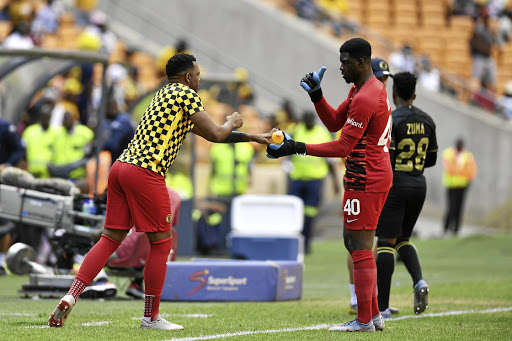 Having reiterated prior to their 2-1 defeat by Maritzburg United that Daniel Akpeyi was ahead of Itumeleng Khune in the pecking order, it'll be interesting to see if Kaizer Chiefs coach Ernst Middendorp sticks by the Nigerian international after an unforgivable howler.

It was Akpeyi's blunder that saw Maritzburg break the deadlock via Dylon Claasen. The Chiefs goalkeeper mishandled the ball, teeing-up Tebogo Tlolane to cross to Claasen to make it 1-0 five minutes after the hour-mark. Claasen completed his double a minute later, while Chiefs scored through Samir Nurkovic later on.

Akpeyi, who had hardly put a foot wrong before the Maritzburg game, was reinstated to the XI after being rested for Khune the previous weekend when Chiefs beat second-tier strugglers Royal Eagles 1-0 to book their spot in the last 16 of the Nedbank Cup, where they meet Highlands Park at Makhulong Stadium on Saturday (3pm). Middendorp implied he's aware of the public pressure calling for Khune to start. However, the German emphasised the club's goalkeeper coaches knows what they're doing.

Daniel Akpeyi is Chiefs' top dog, but Khune vows to fight on

Having played second fiddle to Daniel Akpeyi at Kaizer Chiefs, Itumeleng Khune appears to be pulling out all the stops to reclaim the No.1 jersey.
Sport
1 year ago

"I know it's something that the entire [country] is looking into it [that Khune must start], this one must play, this one must play. [But] are you really convinced that our goalkeeping coaching department are not able to see what's going on, when is the right time?" asked Middendorp.

Heading into Nedbank Cup clash against Highlands, that will be followed by the Soweto derby against Orlando Pirates on February 29, Amakhosi have three players in Daniel Cardoso, Reeve Frosler and Lebogang Manyama sitting on three yellow cards.

This means if the trio get booked against the Lions of the North they'll be suspended for the derby, meaning Middendorp might not use them on Saturday to save them for the derby.

Despite the defeat, Chiefs remain top of the table with 45 points after 20 outings, and Middendorp feels there's still a long way to go before the title race is decided.