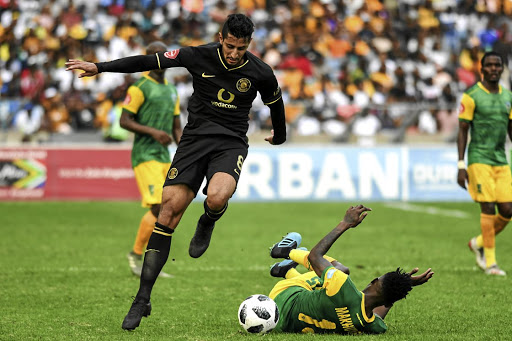 With just four months remaining on his contract, Kaizer Chiefs striker Leonardo Castro has given an impression that the ball is in the club's court to decide if his future lies at Naturena or elsewhere.

"This part of the questions [about contract negotiations], you can deal with it with the management and manager [Bobby Motaung], they will talk to you in a way you can find answers," Castro stated.

A fortnight ago, Chiefs renewed the contracts of Willard Katsande, Daniel Akpeyi and Bernard Parker. Katsande and Parker were given one more season, while Akpeyi earned himself a two-year extension. George Maluleka is another player who's yet to agree to a new deal.

Taking into consideration their 18-month transfer ban by Fifa, Amakhosi cannot afford to lose any of their players particularly a regular like Castro.

Kaizer Chiefs striker Leonardo Castro is relishing his partnership with Samir Nurkovic‚ saying he could not have been paired with a better player as ...
Sport
1 year ago

Kaizer Chiefs coach Ernst Middendorp has said the fruits of Khama Billiat’s rest were there to see as the playmaker came off the bench in Amakhosi’s ...
Sport
1 year ago

Chiefs, who've since confirmed they're appealing to the Court of Arbitration for Sport (CAS), found themselves on the wrong books of the global football governing body for signing Malagasy player Andriamirado "Dax" Andrianarimanana without duly compensating his ex-team Fosa Juniors in July 2018.

With the prospect of campaigning in the ever-taxing CAF Champions League next season, as they currently top the standings, letting any player leave amid the transfer ban would deplete Chiefs' squad.

However, coach Ernst Middendorp sounded rather unfazed by the possible ban. He pins his hopes on youngsters such as Njabulo Blom, Happy Mashiane and Nkosingiphile Ngcobo, alongside players who are on loan at Moroka Swallows, to step up to the plate in case their appeal fails. "Basically, we have a qualified PSL squad. So far, most of the players have contracts. We also have some good young guys from Happy to Njabulo and Ngcobo, we've used them already," said the Chiefs mentor.

"And [we have] some players at a second division side, four in total are at Moroka Swallows [in Sizwe Twala, Given Thibedi, Itumeleng Shopane and Ayanda Rorwana]."