Ernst Middendorp spoilt for choice in the goalkeeping department 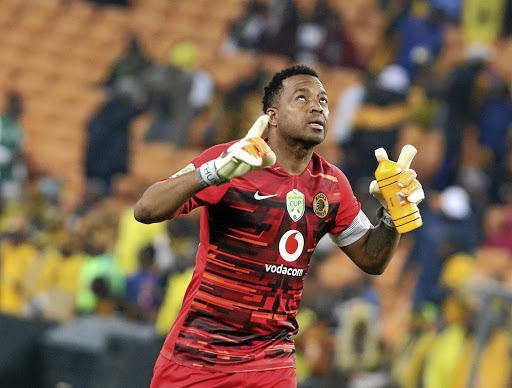 If there is one coach who claims to be spoilt for choice in the goalkeeping department, it is none other than Ernst Middendorp.

The German mentor says he is very lucky to have both Daniel Akpeyi and Itumeleng Khune among his troops at Kaizer Chiefs as it gives him options concerning selection.

Khune was between the poles and kept a clean sheet on his return when Chiefs squared off against GladAfrica Championship side Royal Eagles in the Nedbank Cup last 32 where Amakhosi emerged 1-0 victorious on Saturday at FNB Stadium. Lebohang Manyama scored the only goal of the match.

Akpeyi has been the one getting the nod ahead of Khune recently and he has been doing extremely well, given the fact that Chiefs are currently at the summit of the log and are tipped as favourites to win the league. Khune's selection did not surprise, but it can also be stated that if Saturday's game was of a higher profile, Akpeyi would have been given the nod. Could this bring headache to the coach going into next matches?

Ernst Middendorp has said that Kaizer Chiefs playmaker Khama Billiat was handed to the club’s medical staff in late December‚ with the message not to ...
Sport
1 year ago

"Basically, we have three national team goalkeepers with Bruce Bvuma included too," Middendorp responded. "With Itu now coming back to the setup ... actually I don't want to make a decision now. Let's wait and see.

"Daniel played in league matches and he was very solid and he kept us in the games very often. At the moment, I will say Daniel will start next week against Maritzburg United. With another round of the Nedbank Cup coming later this month, quality is there and I don't have a problem on selecting Itu or Daniel."

Middendorp got rid of error-prone Virgil Vries at the beginning of the season, while elevating Nigerian Akpeyi to number one ahead of Khune.