Pirates show they have a new Sheriff Zinnbauer in town, as they down Sundowns 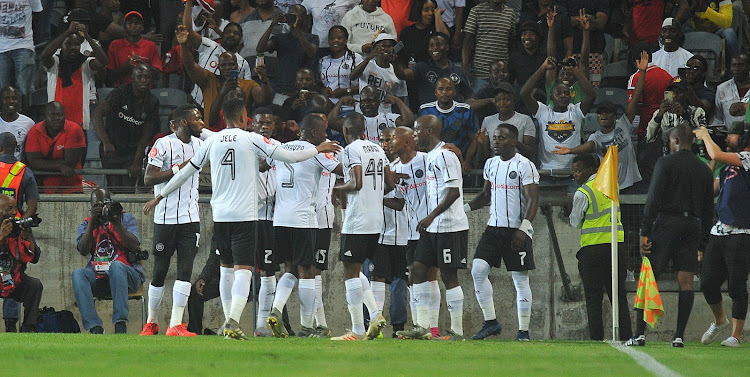 Mamelodi Sundowns’ ambitions of defending their Absa Premiership title took a blow, as Orlando Pirates continued to look as rejuvenated as a buccaneer spared from the gallows with a 1-0 win at Orlando Stadium on Wednesday night.

Gabadinho Mhango’s sensational scoring form continued with a 30th-minute winning strike. Bucs’ flaw again came in a second half spent on the back foot, trying to defend a 1-0 lead.

Kaizer Chiefs coach Ernst Middendorp would have said a silent prost to his new PSL countryman Josef Zinnbauer, as would the Amakhosi players.

With PSL leaders Chiefs far less experienced than Sundowns at clinching trophies and under pressure to reverse four unprecedented seasons without silverware in their 50th anniversary season, a decent points gap going into their last 10 games will boost their title chances.

Pirates’ dynamic form under Zinnbauer can no longer be called beginner’s luck. Eight goals in his first three games – two wins and a draw – became nine in four.

Mhango has gone in no time from erratic to the PSL’s currently most explosive goal sensation, with seven strikes in four games since the coach arrived.

Mhango, in the first half, fed off Luvuyo Memela, dangerous again up-front.  Bucs’ first-half football was crisp and fast. The second 45 minutes showed there is plenty of room for improvement.

Big games can expose frailties, even in seemingly almost invincible line-ups. Bucs’ Memela and Mhango fed off each other. Sundowns’ Gaston Sirino was a more lonely creative figure, with forward partners Sibusiso Vilakazi, Thapelo Morena and Sphelele Mkhulise, by their standards, flat and almost wrapped up.

Downs did hit the woodwork three times, in another wildly entertaining matchup of these teams in front of a packed Orlando Stadium.

Sundowns are striving for continental glory again this season, and top the Caf Champions League’s Group C. In the PSL, they have had a lot of draws and 1-0 wins.

Last night they suffered a defeat by that scoreline. And Pirates showed they had a new Sheriff Zinnbauer in town.

Sundowns came out applying pressure on the goal in front of a bank of their supporters in the north stand.

Gaston Sirino’s free-kick from deep was headed onto the right upright by Anele Ngcongca.

Pirates began to pick each other out with passes, and, with speed in attack, to also pick holes to get behind Downs.

Thembinkosi Lorch’s touch came off Downs defender Mosa Lebusa into the path of Memela down the right, who found Mhango free in the middle, who toe-poked past Denis Onyango.

As Downs again edged an advantage =from the break, Zinnbauer brought off Memela in the 56th for young Thabiso Monyane.

Pirates, so all over the place in the opening half of the season, were effective in their game management and ability to close danger situations.

It was not Downs’ night. Sirino’s late 24-metre drive came off both uprights and substitute Lebohang Maboe could not scramble the loose ball over.