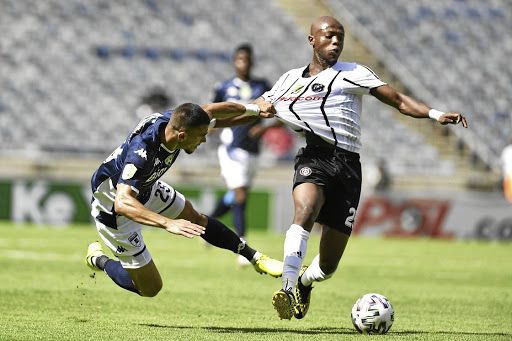 In a match that produced two penalties and two red cards, coupled with some dubious decisions by match officials, Bidvest Wits needed penalties to dump Orlando Pirates out of the Nedbank Cup.

Wits won 3-2 on penalties here yesterday, advancing to tonight's last 16 draw. The match went into penalties following a 3-3 stalemate. Happy Jele's header in the 74th minute to make it 2-2, had sent the tie into extra time.

The visitors' assistant coach, Paul Johnson, and winger Elias Pelembe, who were disputing the decision to award Pirates a penalty, were red-carded. Pirates' penalty came a few minutes after the Clever Boys were denied what looked like a clear penalty when Jele brought Gift Motupa down inside the box.

The Sea Robbers were dealt a major blow when right-back Abel Mabaso was forced off with what looked like a hamstring discomfort in the 12th minute. Alfred Ndengane took his place but partnered with Jele at the heart of defence as Ntsikelelo Nyauza moved to the right-back position.

Pirates' supremacy on the ball was largely aided by their effective wing play of Luvuyo Memela and Vincent Pule.

In the absence of their suspended top-scorer Gabadinho Mhango, Bucs struggled up front as Zakhele Lepasa, who was spearheading the attack, looked rather rusty, having last played a competitive match in his Bucs debut against Chippa United in September last year.

Inside the first 20 minutes, Wits committed a number of fouls, giving Pirates free-kicks in dangerous areas.

Even with their dominance, Bucs found themselves heading into the first-half break trailing by two goals.

Wits broke the deadlock via Bienvenu Eva Nga's penalty two minutes before the half hour-mark after referee Victor Gomes adjudged Fortune Makaringe to have handled the ball inside box. Deon Hotto doubled the Students' advantage on the stroke of half-time.

Pirates were more purposeful in the second period and scored two goals via Thembinkosi Lorch and Jele, forcing the match into extra time, where Motupa's 120th-minute goal took it into penalties. From there, Wits prevailed.