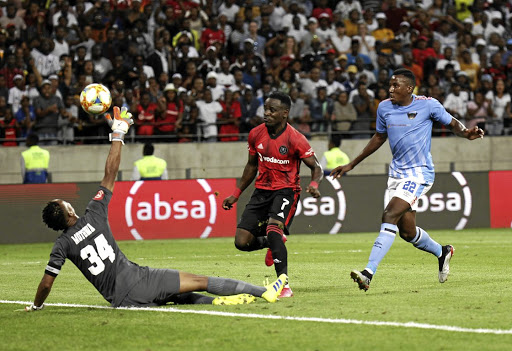 Having found it hard to replicate the form that earned him the Footballer of the Season gong last season, it's a matter of time before Orlando Pirates ace Thembinkosi Lorch reaches the same dizzy heights.

This was the sentiment of his coach Josef Zinnbauer in the wake of their 2-1 win over Chippa United at Nelson Mandela Bay Stadium at the weekend.

Runaway top-scorer Gabadinho Mhango netted a first-half brace for the Buccaneers, while Augustine Kwem struck what eventually proved a mere consolation for the Chilli Boys. Mhango now leads the scoring charts with 14 goals.

While it was the Malawian marksman who again bagged the vital goals that inspired the Sea Robbers to the second spot on the log, Zinnbauer looked more impressed by Lorch's contribution.

"Lorch.... you [the media] know better than me that Lorch is a big player in Africa. Last year, he was very well, doing many good things and now he's on the way. He's returning to his best form gradually," Zinnbauer said of the attacker.

"For me, it's because he's been working on his defending [that he is slowly getting his best form] and in the past it wasn't like that. Now he works for the team, he's a team player. He's definitely heading in the right direction."

Orlando Pirates are slowly but surely marching on and forcing themselves into Absa Premiership title contention as they continue to notch up win ...
Sport
2 years ago

Despite surging into position two on the table with 36 points, nine behind leaders Kaizer Chiefs, the Buccaneers mentor continued to downplay their
title aspirations.

Pirates are one game ahead of Chiefs, who've played 19, with third-placed Mamelodi Sundowns having played 18.

"Yeah, we are number two at the moment, but other teams have played fewer games than us," said the German.

"If they win their games, our second spot is done, so we can't talk about winning the league."

The high-flying Buccaneers next face an unpredictable Bidvest Wits side in the Nedbank Cup first round at Orlando Stadium on Sunday [3pm].

"We have to work even harder in order to win this game. We have a big chance to win because now we have confidence. We'll continue doing like we've been."