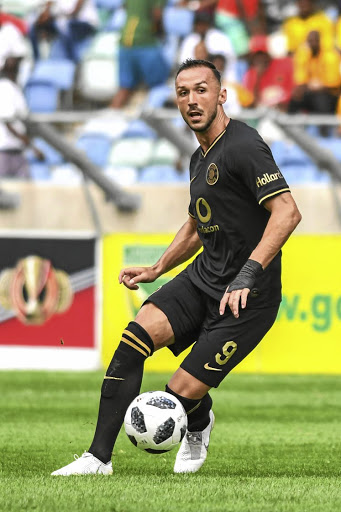 Kaizer Chiefs striker Samir Nurkovic is targeting no less than 20 goals this season as he looks to help power his team to the league championship.

Amakhosi have not won a title in five years. This current season is the most promising yet that the club could end the drought.

Nurkovic has played a big role in this season of redemption. He is among the top scorers in the league with 10 goals to his name.

In fact, Nurkovic is the first Chiefs attacker since Bernard Parker in 2014 to score at least 10 goals.

"Yes, my job as a striker is to score as much as possible goals in every game. Personally, I'm not happy when I don't score in a game," Nurkovic said.

"Before every game I set my mind that I have to score and help the team and contribute to victory."

Having embraced the "Kokota Piano" nickname, Kaizer Chiefs striker Samir Nurkovic would also like to see Amakhosi dance all the way to the Absa ...
Sport
2 years ago

The 27-year-old has picked up from where he left off last season when he was on the books of Komarno in Slovenia.

Nurkovic aims to get as close as possible to his scoring record from last season.

"In 28 games I scored 23 goals and had five assists for my previous team last season. Of course, I would like to score as much as possible this season. However, it is very important that the team is winning even if I'm not scoring," he felt.

At the weekend Chiefs overcame a tenacious Golden Arrows with a late winning strike from Lebogang Manyama in Durban.

Nurkovic has praised his teammates for each playing their part in the season so far.

"It's not hard to understand each other when you understand football. It's best played simple.

"It's not about me and Leonardo Castro, there are other teammates who are helping our team perform. We have Lebo Manyama, Bernard Parker and Dumisani Zuma who are also contributing."

Samir Nurkovic says premiership leaders Kaizer Chiefs have a marksman’s target centred on the back at the moment and he expects their rivals to try ...
Sport
2 years ago

This was truly an ugly advert of the beautiful game‚ an error ridden affair that would have been shamed by a spectacle of pot-bellied souls in a ...
Sport
2 years ago

The awards just keep coming at Kaizer Chiefs this season after Samir Nurkovic bagged the Absa Premiership Goal of the Month award for December for ...
Sport
2 years ago
Next Article