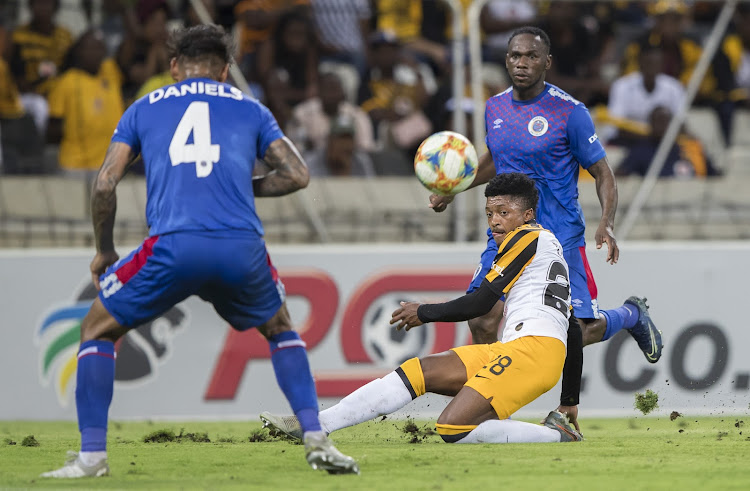 Kaizer Chiefs and Mamelodi Sundowns have been talked of as the 2019-20 Absa Premiership’s title favourites, but SuperSport United sent a timely reminder that they are every part still in the race beating Amakhosi 2-1 at a packed Mbombela Stadium on Saturday night.

Bradley Grobler gave SuperSport, who came into the game in third place, a ninth-minute lead. Daniel Cardoso equalised from a penalty in the 48th that was softly awarded, but Chiefs did strike the woodwork three times in a game of high tempo and quality, and many chances.

Substitute Thamsanqa Gabuza banged in SuperSport’s winner in the 61st.

Chiefs enjoyed much of the play, but Kaitano Tembo’s SuperSport – one of this season’s truly classy combinations in each field position – matched them pound for blow, and blow for pound.

The first half was played with pace and force by both teams. Chiefs had a chance just past 30 seconds when right-back Reeve Frosler floated a cross from deep that Leonardo Castro headed inches over.

SuperSport are a formidable combination of technically-gifted players who function within an organised framework that suits such capabilities. They showed all those qualities earning their opener.

Chiefs centreback Daniel Cardoso left a ball loose on the left of his area with an intercept, which was collected by one of United’s two midfield starlets, Teboho Mokoena. He took on Cardoso then repeated what Grobler told him to do when SuperSport won October’s MTN8 final – floated a cross to the far post that Grobler buried.

Amakhosi struck the goalposts twice before the break seeking an equaliser.

George Maluleka’s free-kick beat Ronwen Williams onto the left upright. The right upright took a blow when Samir Nurkovic curled a bouncing strike through the area.

In-between those chances Dean Furman came unusually close to scoring striking a drive to be parried by Daniel Akpeyi.

Chiefs have been accused of having officiating decisions go their way. They appeared to profit for their penalty moments into the second half.

Clayton Daniels got down low for a header to Bernard Parker’s cross, and appeared to connect with his shoulder. Referee Lukolo Badi pointed to the spot for handball. Cardoso struck down the middle to beat Williams.

SuperSport opened Chiefs to take the lead again. Kudakwashe Mahachi was played by Furman’s first touch into space on the left and squared for Gabuza – on for Sipho Mbule from the break – to bury free on the right.

Siyabonga Nhlapo’s pass was missed by Grobler and fell to Gabuza, who struck past the post.

Chiefs struck the post for a third time as, from Frosler’s cross, Nurkovic’s overhead kick rebounded off the face of Castro onto the upright.

Amakhosi substitute Dumisani Zuma forced a save from Williams at full stretch with a blistering drive. United replacement Ghampani Lungu’s chest and volley to almost shock Akpeyi was even more spectacular.