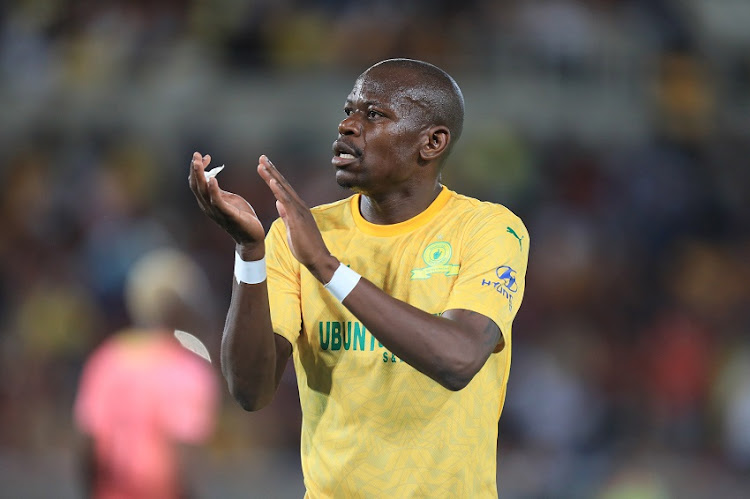 The player was sent to an early shower after pushing the referee in a Caf Champions League preliminary round first leg 2-1 away defeat against AS Otoho of Congo Brazzaville in August‚ but Sundowns managed to keep the news of his ban away from the media and the public.

SowetanLIVE has established that contrary to claims that coach Pitso Mosimane was resting the 34-year-old in the last few weeks‚ he was actually quietly serving his punishment.

Sundowns acting general manager Yogesh Singh confirmed that the player was returning from a four-match ban.

“Yes I can confirm that Hlompho Kekana was handed with a four-match ban during our match in Brazaville in the Congo in August‚” Singh said on Wednesday.

“Has he served his four-match ban? Yes.

"Is he available for selection for Saturday’s match? Yes”.

With Sundowns trailing AS Otoho 2-1 in the first half of the encounter in the Congo capital of Brazaville‚ Kekana received a throw-in just after the centre line and made a storming run that eliminated four opponents with the ball at his feet before he was adjudged to have fouled a defender on the edge of their modest hosts' box.

The Sundowns captain reacted angrily and allowed his emotions to get the better of him.

With a yellow card already out waiting to be flashed in his face‚ Kekana had his moment of madness as he pushed the official and the referee did not hesitate to send him off.

SowetanLIVE understands that a disciplinary hearing was not held but as per Article 129(a) of the Caf disciplinary code‚ a player suspension emanation from a red card as a result of misconduct against a match official automatically doubles to four matches.

Kekana also missed out on the one-sided two-legged 16-1 aggregate win over Cote d'Or of the Seychelles.

He served the last match of his ban in the trouble-free 3-0 win over Angolan outfit Petro de Luanda at Loftus in the first match of the Champions League group stages at the weekend.

He was part of the Sundowns squad that flew out to Morocco on Monday for their titanic Champions League clash against nemesis Wydad Casablanca.

The match will kickoff at 9pm SA time on Saturday evening with the Brazilians looking get a result that will keep them at the top of Group C after match-day two.

Sundowns are yet to taste victory against Wydad in Casablanca and the return of Kekana along with several other key players will be welcome news for the club.

Mosimane’s charges have lost four times in a row against Wydad and‚ in eight encounters between the two sides‚ the Brazilians have claimed two wins and as many draws while the Moroccan giants boast four wins.