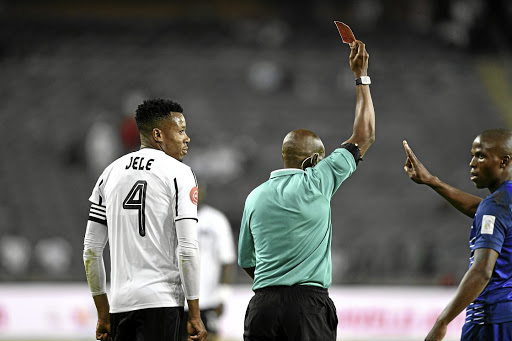 With their captain Happy Jele suspended, Orlando Pirates interim coach Rulani Mokwena has implied that Ntsikelelo Nyauza could be the man to lead them to the Soweto Derby promised land against old foes Kaizer Chiefs this weekend.

Jele received a red card in the goalless draw against Maritzburg United at Orlando Stadium on Tuesday night.

The skipper will be unavailable for the league clash with Chiefs at the FNB Stadium on Saturday (3,30pm kickoff).

But Mokwena is not concerned as he reserved praise for Nyauza.

"I want to express a special word to him because at the beginning of the season he was not playing," Mokwena said.

"He has done well to win his place in the team. I call him the beast. He is colossal. He wins his aerial duels and he is not afraid to pick up players on his own. He has an unbelievable presence in the changing room and he's a leader."

Nyauza will be expected to marshall the defence in the derby clash. The 29-year-old from Matatiele sounded like he was ready to step up to the plate.

"There isn't anything bad happening in our team, it's just that we have to convert our chances.

"We have an important game [against Chiefs] and we have to work on our game plan and focus on that."

Orlando Pirates came up short against traditional rivals Kaizer Chiefs after they were beaten 4-2 on penalties in the quarterfinals of the Telkom ...
Sport
2 years ago

The Buccaneers' lackluster performance against Maritzburg was the fifth game in the 12 that Mokwena has been in charge that the team has failed to score.

After losing to Chiefs on penalties in the Telkom Knockout at the weekend, Mokwena conceded that the minds of his players were on the second installment of the derby.

"They are human beings and know what the derby means to the club and themselves as players," he said.

"It's was clear in certain moments that their bodies were here with me but their minds were on the other side of town at the FNB Stadium. It's okay they are humans and we just have to make sure we get into the right frame of mind."