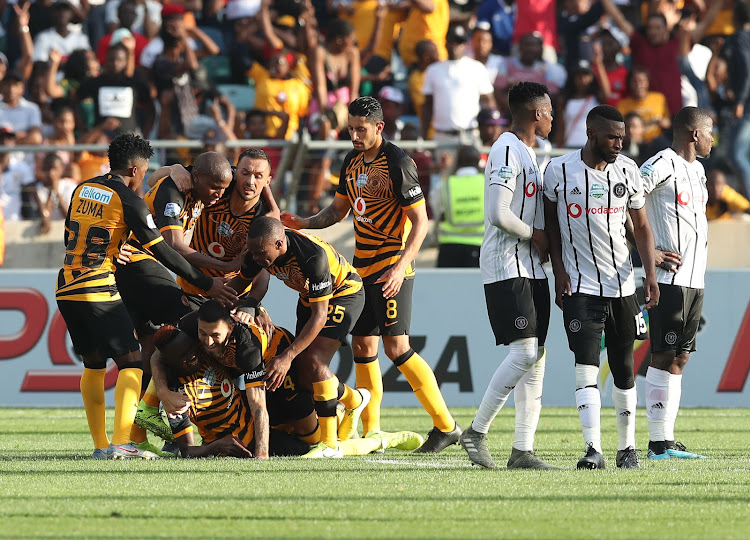 Daniel Cardoso celebrates with teammates after scoring the fourth goal of the match to make it 2-2.
Image: Samuel Shivambu/BackpagePix

Orlando Pirates came up short against traditional rivals Kaizer Chiefs after they were beaten 4-2 on penalties in the quarterfinals of the Telkom Knockout at the Moses Mabhida Stadium on Saturday.

After 120 minutes of engrossing attacking football‚ the two teams could not be separated as they were tied at 2-2 and needed the lottery of the penalties to decide the match.

But how did the individual players fare?

Here are the Pirates player ratings (out of 10):

He made a good save right near the end of game to deny an in-swinging corner but actually had the least work of the two goalkeepers.

No saves in the post-match shootout.

Sent off in the 49th minute for a second yellow card as he buckled under pressure and got caught in possession by Chiefs star Khama Billiat.

He was effectively sucker-punched and is now out for the next two games‚ including next Saturday’s return derby.

Still going strong at the age of 32 and there is no reason why he shouldn’t be in the new Bafana Bafana coach’s plans.

Sometimes caught out of position but there is no faulting his passion and determination.

A late challenge on Dumisani Zuma after 54 minutes should have been punished with a penalty but the referee missed it.

He has not looked comfortable since being employed at centre-back in recent games.

Enterprising on attack and proved he should also be a starter after a couple of games out of the team.

He has to be careful about his fiery temper though.

Second game back after injury and still needs a little rhythm.

Worked hard and snapped at the heels but lacked a little of the sharpness he will get with more game time.

A first Pirates goal came as reward for joining in the attacks and availing himself in space.

He could form a solid partnership with Motshwari‚ which should allow him to push forward more.

Relatively quiet game and it was for this reason he got taken off to add Paseka Mako to the defensive line-up after Dube’s red card.

Should have been sent off for a stamp on Billiat but rode his luck and was always at the heart of Pirates’ attacks.

When he starts to be more incisive‚ he is going to earn an overseas transfer.

Too hurried with his final touch‚ which undoes all the good work he achieves with his pace and skill.

Clever near-post header saved by Akpeyi just before he went off in the 74th minute.

Worked hard not only in the attack but also trying in defence. But after the first half saw less of the ball and therefore couldn’t make any real impact.

On to help the defence after Dube’s dismissal and showed why he should not have been benched by Rulani Mokoena in the first place.

ABEL MABASO and FRANK MHANGO also came on and Mhango scored with his first touch.