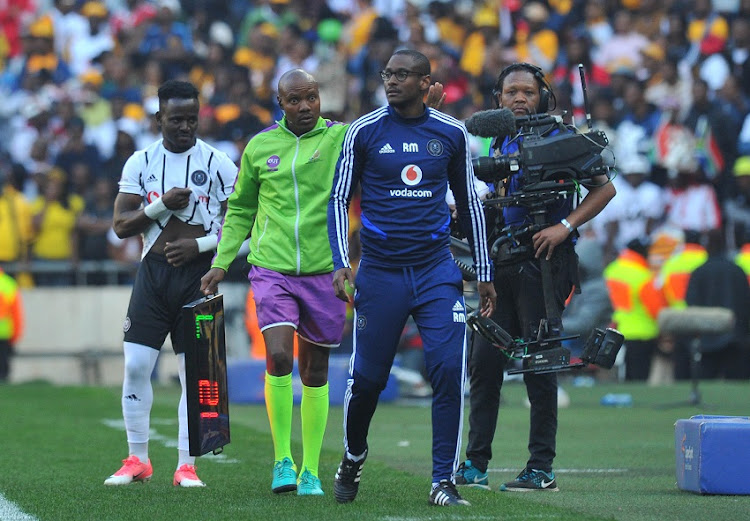 Orlando Pirates stand-in coach Rulani Mokwena has described the poor performances by match officials in recent weeks as a loud cry for help.

Pirates were grateful beneficiaries of another poor day at the office by the match officials after a dubious goal that Mokwena himself admitted was offside was enough to beat Highlands Park 1-0 in an Absa Premiership match in Tembisa on Wednesday night.

Mokwena was initially reluctant to talk about the match officials but later said their performances were a cry for help.

“I prefer not to talk about the refs but I think what’s happening in the country is sad‚ it’s very sad‚” he said.

“I had the opportunity to watch the highlights of the Highlands Park match... before I was asked to comment on the offside goal‚ I hadn’t seen the clip but of course it was an offside‚” he said.

“They (match officials) make mistakes and everybody makes mistakes‚ but I think what is happening is a clear signal for assistance.

"They are crying out for help but I don’t know what type of help.

"It could be technological or it could be to add more resources‚ I don’t know but what is happening is that they are crying out for help.

#OrlandoPirates coach #RulaniMokwena on the state of officiating in the #PSL.

“I don’t know whether it’s deliberate but the cry is very loud and they need help and support.

"They don’t need us to be bashing them but they need our support at this moment.”

Safa’s chairperson of referees appointment committee Ari Soldatos agreed with Mokwena and said the local authorities must invest in technology or risk being left behind.

“Goal-line technology must be introduced as a matter of cause‚ I don’t believe it is too expensive and in time VAR must happen.

"I am very much a strong proponent for goal-line technology‚” said Soldatos.

Soldatos said he was concerned by the escalating mistakes committed by officials‚ especially assistants‚ in high-profile games.

“Let’s cut to the chase‚ when you look at the goals that were disallowed in the match between AmaZulu and Chiefs for an example‚ that is an area for concern‚" he said.

"There have been one or two incidents which have affected the results of games.

“In recent weeks‚ certain decisions were made where the assistants‚ and not referees‚ have erred.

"In one or two incidents‚ it has been errors in high-profile matches and that is a measure for concern. I need to also say that mistakes will always be made.

“Having said that‚ I think the standard of referees generally has been good.

"If you look for an example at the game between Mamelodi Sundowns and Kaizer Chiefs at the weekend‚ the guys did well.”