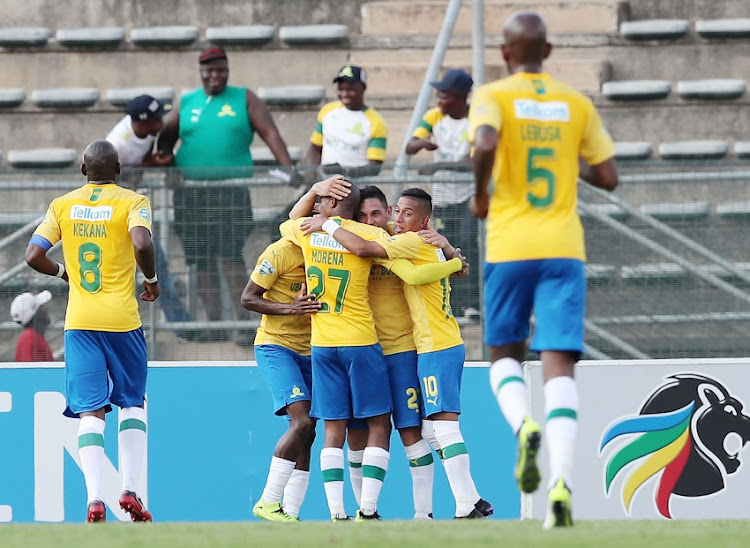 Mamelodi Sundowns showed complete dominance in their convincing 5-0 Telkom Knockout thrashing over out of sorts AmaZulu at the Lucas Moripe Stadium in Atteridgeville on Sunday afternoon.

With this victory, the Brazilians joins Kaizer Chiefs, Orlando Pirates, SuperSport United, Golden Arrows and Maritzburg United who have already booked their places in the next round.

Sundowns went to half time with a slender lead of 1-0 from the effort of Ali Meza but they were ruthless after the break with four more goals as they made clear their intentions of winning this trophy.

Pitso Mosimane’s men put this impressive performance in front of Kaizer Chiefs coach Ernst Middendorp who they meet in the crunch Absa Premiership clash next weekend.

It took Sundowns until the last minute of the first half to take the lead when unmarked Meza connected with a pin point pass from Sibusiso Zwane inside the box to give them the lead.

On numerous moments in the game, they left AmaZulu off the hook as they went for wrong options or they were denied by alert visiting goalkeeper Neil Boshoff who pulled some good saves.

It was not only Sundowns who provided some good attacking moments in the game as AmaZulu also threatened with the likes of Buthulezwe Ncube, Ovidy Karuru and Bonginkosi Ntuli.

During the break, Sundowns coach Pitso Mosimane could have expressed his disapproval in the manner they wasted their chances but they recovered in ruthless fashion to put AmaZulu to the sword.

Carnage started after 55 minutes when AmaZulu debutant shot himself in the foot when he beat his own goalkeeper Boshoff with a header that increased Sundowns’ lead.

Sundowns midfielder Andile Jali played a long pass into the AmaZulu danger area from the midfield aimed at advancing Meza but Booysen got to the ball first and flicked it backwards but Boshoff had moved out of his line.

Sundowns put matters beyond doubt on the 70th minute when Sirino beat Boshoff from the penalty spot after Morena was hacked inside the penalty box by Mbongeni Gumede.

Sirino completed his brace a few minutes later as Sundowns exposed the poor AmaZulu defence of Thembela Sikhakhane and Tapelo Gumede and took firm control of the match.

Then, Mauricio Affonso joined the scoring party three minutes from time as the Brazilians stormed into the quarter-finals in style and with five unanswered goals.