Pitso Mosimane to Kaizer Chiefs: 'We move on‚ we meet again in two weeks' 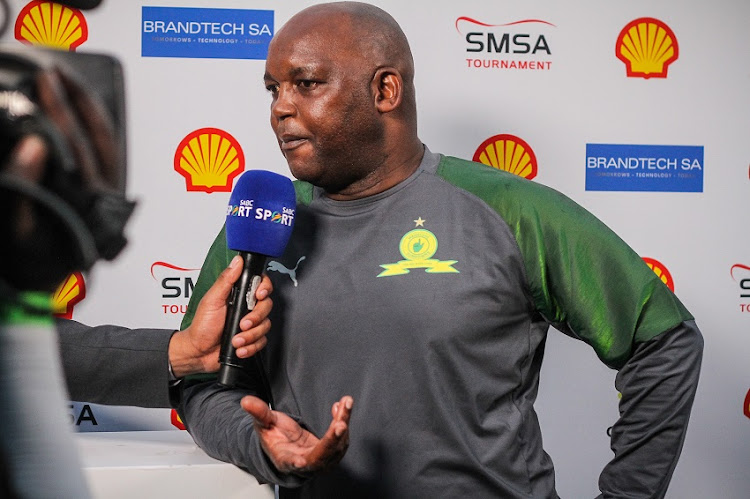 Mamelodi Sundowns coach Pitso Mosimane was complimentary to Kaizer Chiefs – even labelling them league title favourites again – and politely played down fielding a B side against a stronger Amakhosi in his team’s 4-2 Shell Helix Ultra Cup defeat on Saturday.

It could only last for so long though.

Downs’ coach could not resist ending with a dig at Chiefs and opposite number Ernst Middendorp in the post-match press conference that seemed so bold as to draw applause‚ saying: “It’s OK‚ it’s part of the game – we move on‚ we meet again in two weeks.”

Mosimane refused to make an excuse that in a fringe team in a friendly – when Sundowns probably also had more stars on international duty – he still held back some big guns to come off the bench.

Ali Meza and Gaston Sirino were strong substitutes and pulled goals back in a second-half fightback that also saw Hlompho Kekana introduced to stabilise Downs.

This after former Brazilians Leonardo Castro‚ with a hat-trick‚ and Khama Billiat‚ who laid on all three passes and added a fourth‚ engineered an improbable 4-0 lead to Chiefs by the break.

“We fielded a credible team. We don’t want to make excuses. We didn’t play a B team‚ we didn’t play reserves – we played fully-fledged Mamelodi Sundowns players ‚” Downs’ coach said.

Mosimane – probably the Premier Soccer League coach who is the most skilled practitioner of the mind game – was on form in that regard sitting next to the often combustible Middendorp in the presser.

He veered between being complimentary to the point of labelling Chiefs league title favourites‚ to ending with a dig that clearly was a warning that the league game in Pretoria can be a whole different story.

“Chiefs are a strong team. A very competitive team. And that’s the difference of Kaizer Chiefs of last year to this one‚” Mosimane said.

“And I still have them as favourites to win the league. Not any team can score four goals against Mamelodi Sundowns.

“And I think Ernst has got four also [in the past] from me. I remember giving the fours – so these things do happen. It’s part of football.

“But Chiefs are strong. They had a good preseason‚ no MTN8‚ no Champions League and going on flights and things like that. This is a big thing. I said this about Bidvest Wits at one time.

“When you have a team of integrity‚ and this is a big team‚ how low can you go? You can’t go lower than ninth [Chiefs’ placing last season]. And coach Ernst is doing a good job. And it shows.”

Mosimane said it was important to look at his fringe players‚ and to “check where Chiefs are”.

“Because Chiefs played a strong team. So I need to know where my team is at the moment in comparison‚” he said.

“There are a lot of negatives from my team‚ a lot of work needed – four goals conceded.

“And I respect the bench‚ the team‚ and Shell Helix also‚ and I respect you guys [the media].

“And I know people are watching at home. My son crying – ‘How can you lose by four?’