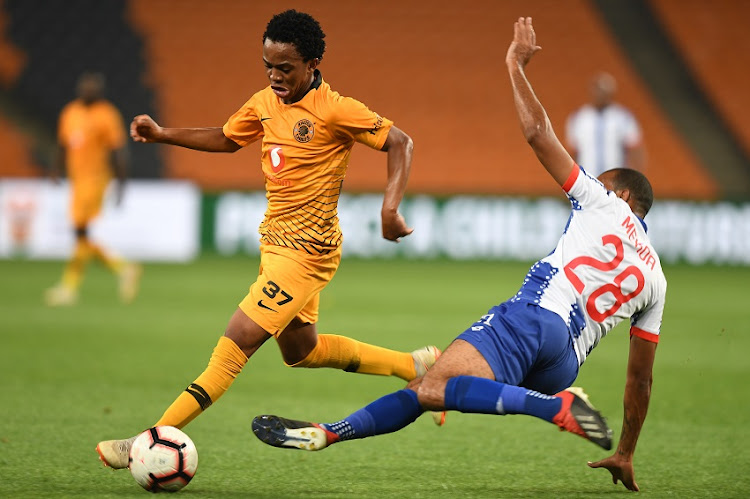 Ngcobo came on at the break for Khama Billiat with the score at 0-0 after a flat first half from Chiefs‚ and showed some excellent touches in a far more energised second half where Amakhosi profited from Dumisani Zuma’s 50th-minute strike.

Middendorp paid tribute to Chiefs’ academy‚ as Ngcobo has become the second exciting promoted prospect after winger Happy Mashiane to earn a debut this season.

Chiefs’ coach said it was unfair that South Africa’s junior national teams at times appear to receive credit for players like Ngcobo’s emergence.

The 19-year-old Ngcobo played a starring role as the SA Under-20s finished third at the Africa U-20 Cup of Nations last month to qualify for this year’s Fifa U-20 World Cup.

“Definitely‚ I saw it already in December‚ with Ngcobo – that he has a huge potential‚” Middendorp said.

“Unfortunately – or fortunately for him‚ and for South Africa – he was needed for the camp for qualifying for the World Cup.

“And then immediately he was back and in training‚ and he confirmed it [his potential].

“It’s quite interesting sometimes – and I fully disagree – how the national team responsibilities make it happen that overnight they create a new star.

"Overnight they produce something.

“I think actually‚ I go a different way. It’s the fantastic work at the academy‚ under the leadership of [Chiefs U-19 coach] Sundra Govinder. They come from there – Happy Mashiane comes from there.

“I only take the risk‚ I have the balls to bring them into the game – [already] prepared.

“That’s it. But prepared. It’s not the national team‚ it’s not me.

“They are prepared by these guys in the academy. And they are fantastic guys.

“And that is what has to be mentioned and has to be seen – these guys are responsible.

“And not so-called guys doing something overnight – falling like snow from Kilimanjaro.

“It’s unfair. It’s simply unfair. And therefore I think it should be mentioned.

Middendorp‚ after his arrival in December‚ had Ngcobo promoted back to Chiefs’ senior team.

Chiefs’ expensive revamp of their academy appears to be yielding results.

Emmanuel Ntiya-Ntiya‚ Hendrick Ekstein and Siyabonga Ngezana are other products to have made a first-team impact in the last five years.