Players to watch in Diski Challenge 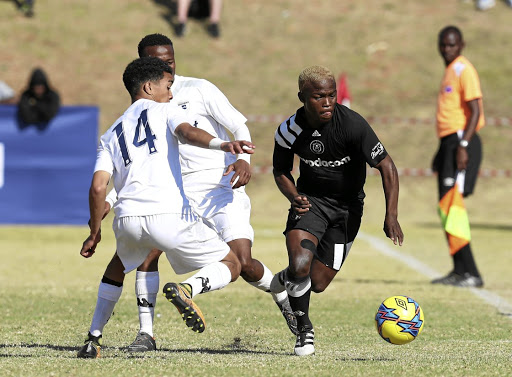 Lehlohonolo Sepeng of Orlando Pirates is challenged by Keenan Phillips of Bidvest Wits in their match last year.
Image: BackpagePix

With the MultiChoice Diski Challenge (MDC) kicking off tomorrow, Sihle Ndebele picks five players who could be the next reserve league stars.

Hailing from Mahikeng in the North West, Phillips is simply destined for greatness if he stays consistent. The Students youngster is a left-back but he's blessed with offensive prowess. The 19-year-old is a big-game player, having proven that on many occasions such as scoring against both Soweto giants - Kaizer Chiefs and Orlando Pirates - in the past MDC campaign. Phillips also scored for Amajita at the Under-20 World Cup in Poland in May.

The budding striker is technically proficient. Shangase, 19, is known for his willingness to chase down and put pressure on opposing defenders, and is capable of playing off his teammates and creating chances for other strikers.

Mkhuma, 19, is one of those players who have proven that height or body structure counts for nothing if you have skill and determination. The sturdy youngster from Mamelodi is an explosive player who is capable of quickly taking two opponents out of the game to create space.

Mayo, 19, jointly won the MDC Golden Boot alongside Chiefs' Sizwe Twala after netting 12 goals last season. The younger son of former Amakhosi striker Patrick Mayo, has been training with the SuperSport senior side, perhaps a sign he's about to get a chance to swim with the big fish.

Zuke is blessed with versatility, having shown that by playing both as a central defender and centre-back. Born in KwaMakhutha, Durban, the 20-year-old utility player also boasts leadership attributes.

MDC Fixtures (all at King Zwelithini Stadium unless stated)