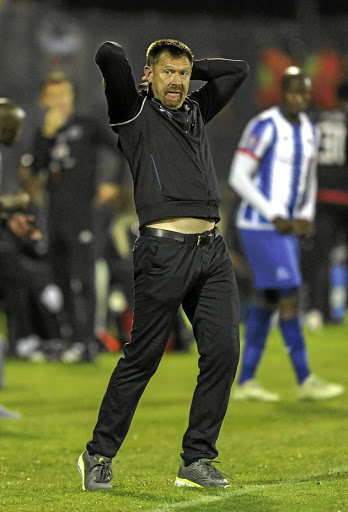 After substantiating their survival credentials by outwitting SuperSport United in a 3-1 win at the weekend, Maritzburg United coach Eric Tinkler has cautioned his troops that the job is not yet done.

A third-minute goal from Mohau Mokate and Judas Moseamedi's brace later on saw Maritzburg emerge victorious at a buzzing Harry Gwala Stadium in Pietermaritzburg. SuperSport got their consolation through Aubrey Modiba.

Though they remain unmoved at the bottom of the log on 26 points, the win over Matsatsantsa gave the Team of Choice a huge boost in their attempt to avoid the axe.

The KZN club will be safe if they beat fellow relegation candidates Baroka away on Saturday, hoping teams above them, like Black Leopards, Free State Stars and Chippa United, tumble at the final hurdle.

"We have not done anything. We still have to go to Baroka and do what we do best. Our fate is still in other teams' hands. It's not a job well done yet," Tinkler said.

What makes Maritzburg the sudden favourites to beat relegation on the final day is that Ea Lla Koto face league-chasing Mamelodi Sundowns and Chippa entertain Kaizer Chiefs, who are eager for a top-eight finish.

Leopards play Cape Town City, who will be fighting to finish third and guarantee their spot in the CAF Confederation Cup.