Can Chippa make most of home advantage? Clinton Larsen hopeful of survival as City visit 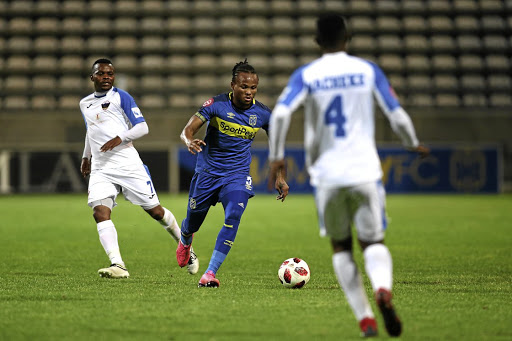 If relegation-threatened Chippa United can rectify their poor home form, they could secure their top-flight status.

The Chilli Boys occupy 15th spot in the PSL with three matches remaining, two of them at home, including tonight's clash against Cape Town City at Nelson Mandela Bay Stadium (8pm).

Chippa have been poor at home this season, with three wins, four draws and six defeats from 13 matches in Port Elizabeth.

Failure to win at home would leave them deeper in the relegation zone, but a win could take them as high as 12th before fellow relegation candidates play this weekend.

"We've got a tough one against Cape Town City and then we've got Polokwane City [away] thereafter," Larsen said. "I would like to get the job done in the next two games and I don't want to leave it to the last game."

Gutted after Chippa United were booted out of the Nedbank Cup semi-final by Kaizer Chiefs (4-2) in Port Elizabeth on Saturday‚ Clinton Larsen is now ...
Sport
2 years ago

Larsen is delighted to welcome back defenders Gladwin Shitolo, Zitha Macheke and Frederic Nsabiyumva, who missed their 3-2 defeat by Mamelodi Sundowns because of suspension.

He feels the team has been better since he took over from Joel Masutha in January.

"When I took over after 17 games and four coaches [Vladislav Heric, Dan Malesela, Eric Tinkler and Masutha] had accumulated 12 points and I got the same 12 points in nine games," Larsen said.

"It doesn't take a rocket scientist to tell you that there has been a significant improvement in performances and results."

Larsen's counterpart Benni McCarthy said: "For us it's about competing and to stay in the top six. Chippa, it's a tough game away."

City will be without striker Kermit Erasmus, who was sent off in their 1-1 draw with Highlands Park.

Chippa coach confident they can beat the drop

Chippa United’s hopes of staying up in the topflight of the Premier Soccer League suffered a blow at the weekend with a home defeat to title-chasing ...
Sport
2 years ago
Next Article