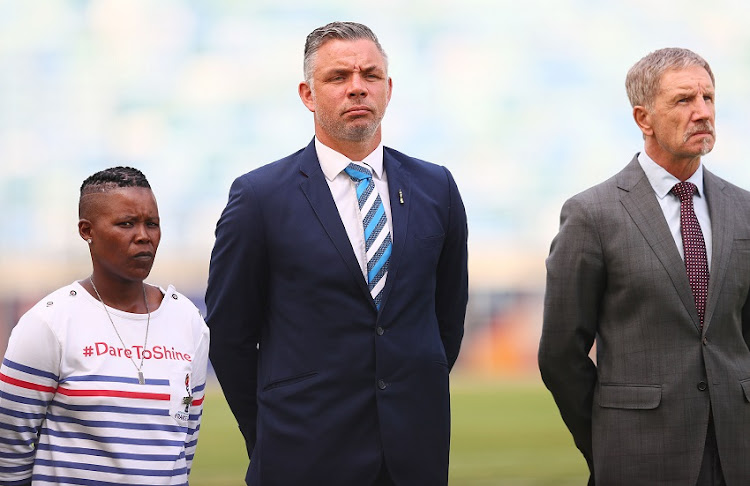 Stuart Baxter is considering bringing in Bafana Bafana legend Mark Fish as the national team’s second assistant-coach/scout for the Africa Cup of Nations (Afcon) in Egypt in June and July.

Baxter has spoken to Fish‚ and is awaiting a response‚ after Quinton Fortune‚ who the head coach had also approached‚ was unavailable.

Fish would serve mostly as a scout at the Afcon‚ with SA Under-17 coach Molefi Ntseki confirmed as Baxter’s first assistant-coach.

“We’re talking about the actual coaching‚ and with the loading‚ we [Baxter and Ntseki] can manage that‚” Baxter said on Thursday.

“The more important part was to get somebody who could partly be with the squad – let’s call it player support.

“Someone who could get around the players and ask them‚ ‘How are you feeling‚ is the food OK‚ how’s the family?’

"That sort of thing‚ and then‚ also be a scout.

“Quinton would have been OK. Quinton can’t do it.

“So‚ after Afcon‚ if he was to get on a plan and visit one of our young players they’d know Mark Fish.

“I’ve spoken to Mark. He’s considering his availability‚ and we’ll take it from there.”

It was put to Baxter that Fish has no top-level coaching experience.

“No‚ Mark’s not a coach. He’s a very experienced football person. And he can understand what I’m looking for‚” the Bafana coach responded.

“When I send someone to monitor a team for me they’re only looking at maybe four or five things. I don’t want to know how the left-back laces his boots.

“That’s all I need to know. The set plays we can analyse on DVD.

“Now‚ I think Mark is more than capable. I think having a coach for that‚ they would be over-qualified.

“If I take the best scout – say for Barcelona – I’m guessing he couldn’t coach Barcelona.

“And the other thing is‚ I don’t have to got to a coach and say‚ ‘Will you go scout for me?’

“I would find that a little bit embarrassing‚ to be honest. And the coach would go‚ ‘Let me see‚ go stuff yourself’.

“If I went to [Orlando Pirates assistant] Rulani Mokwena‚ and asked him to scout‚ I’m sure he’d feel‚ ‘I’ve done enough to warrant not needing to go and scout for you mate’.

“I think Mark‚ if he knows what we want‚ can do it. At the some time I think there’d be a bit of friction if we went to an overqualified person and asked them to do it.”

Bafana play their opening game at Egypt 2019 against Ivory Coast in Cairo on June 24. SA have also been drawn with Morocco and Namibia.