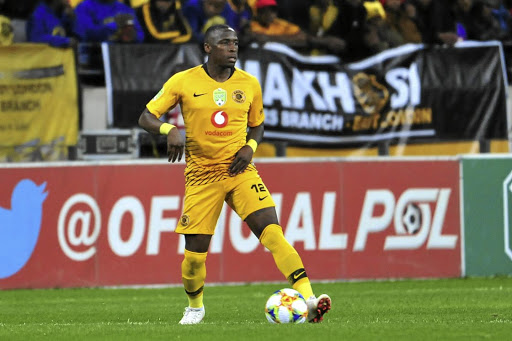 George Maluleka of Kaizer Chiefs is in great form at the moment and looks forward to the Nedbank cup final against NFD side TS Galaxy at Moses Mabhida Stadium on May 18.
Image: Deryck Foster / BackpagePix

Kaizer Chiefs midfielder George Maluleka is delighted to have reacted to his critics with some good performances.

"Mido" has shown many times what he's capable of on his day, but he's also come in for some criticism for below par performances.

Coincidentally, Maluleka's good performances have come at a time when Chiefs have also responded to their critics by reaching the Nedbank Cup final after beating Chippa United 4-2 in Port Elizabeth at the weekend.

Maluleka is relishing a good finish for Amakhosi, who will play NFD side TS Galaxy in the decider at Moses Mabhida Stadium on May 18.

"I wouldn't say my game has changed. I think the coach has shown belief in me and I've been given more responsibilities," Maluleka told the Sowetan yesterday.

"I am enjoying myself and it's something that I have accepted to take the pressure in.

"I've been getting criticism here and there, with the fans saying I can do better than I'm playing right now. I've received that with a lot of good vibes and I think that's why I'm enjoying football. The modern game is based on the mental aspect," he said.

"As a team, I wouldn't say we have bounced back yet," he continued. "On the 18th [of May], we would be able to say 'we are here now and we've made it'. There is still a lot of work to be done and the team knows which direction we want to go - it's a building process, with the coach [Ernst Middendorp] having come in [late last year]," Maluleka stated.

"The way the coach is managing the team has been unbelievable. For example, [Kabelo] Mahlasela came to the party with immediate effect as much as he wasn't playing and the coach made sure he understood his role."

Before Chiefs' attempt at Ke Yona glory, there's a matter of finishing the league and they face Golden Arrows at FNB Stadium tonight [7.30pm].

This will be a battle against their former coach Steve Komphela, who's now in charge of Abafana Bes'thende.

Maluleka insisted that Chiefs still have a lot to play for despite missing out on the title.

"We want to qualify for CAF so, we have to finish second or third," added Maluleka.