Lepasa lets his boots do the talking 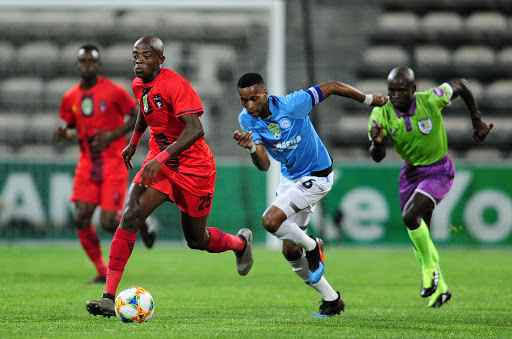 TS Galaxy hero Zakhele Lepasa, who scored a brace against Golden Arrows to inspire the second-tier outfit to the Nedbank Cup final, may have done enough to return to his parent club Orlando Pirates.

Lepasa, 22, a Bucs player, is aiming to build his profile in the National First Division (NFD). Last season he was at Stellenbosch on the same basis.

He came off the bench to help Galaxy beat Premiership side Arrows 3-1 at the Sugar Ray Xulu Stadium on Saturday.

The lad from Dobsonville, Soweto, grabbed his brace in extra time.

"I do not think about it
[returning to Pirates]. you have to focus here," Lepasa said.

Thembinkosi Lorch, Innocent Maela and Mthokozisi Dube are recent Bucs players who benefitted from being loaned out.

Between 2015 and 2017, Lorch had successful loan spells at the now-defunct Cape Town All Stars and Chippa United.

Maela was at Thanda Royal Zulu two years ago, while Dube only returned to Pirates in 2017 after loan spells at Sivutsa Stars and Bloemfontein Celtic.

"If they do call me back, I would really appreciate it. If not, it's part of football,'' said Lepasa, who has three goals in four Nedbank Cup appearances.

Galaxy, formed last year after player agent Tim Sukazi purchased All Stars' status, will meet Kaizer Chiefs in the final at Moses Mabhida Stadium on May 18.

"It'll be good to play Chiefs. Players want exposure. If we're at our best, no team can match us,'' said Lepasa.

TS Galaxy, the new National First Division team owned by former agent Tim Sukazi, have had a dream birth that will now be crowned by writing their ...
Sport
2 years ago
Next Article