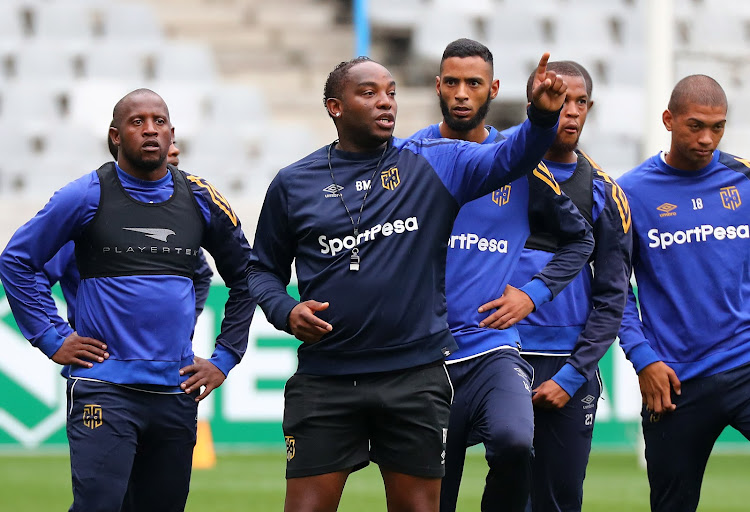 Benni McCarthy says striker Kermit Erasmus was provoked ahead of his red card against Highlands Park on Tuesday night‚ and believes it is a tactic opposition teams use to unsettle his side.

Craig Martin cancelled out a Tendai Ndoro goal to earn a point for City that is likely not enough to keep them in the title race.

But the major talking point will be the red card for Erasmus after 20 minutes‚ as he landed a vicious kick on Highlands captain Mothobi Mvala when the ball was dead‚ and was deservedly sent to the stands by referee Eugene Mdluli.

While McCarthy admits it was a “stupid reaction” after Mvala had picked up the ball to prevent a quick free-kick‚ he also believes there was a targeting of Erasmus by the visitors.

“Kermit … a stupid reaction‚ but he was provoked I would say. But then you bite and leave your team with 10 men‚” McCarthy said.

“Up until he got provoked and got sent-off‚ he was sensational.

"They couldn’t handle him and that was the only way they could try and stop us and get a point from the game was to get one of our players sent-off.

"Thabo Nodada out the whole season after tackles from them. They know the capability of our team.

“It is actually a positive for me and my players that those are the kind of tactics teams set up against you. It means we are making good progress.”

Kaizer Chiefs plucked a draw from the jaws of victory, having to settle for a 1-1 scoreline that belied their almost complete domination of ...
Sport
3 years ago

City kept plugging away at Highlands even with 10 men and although the visitors had a number of chances to kill the game after they took the lead‚ were probably good value for a point in windy and difficult conditions.

“It was a good game of football‚ we tried to make the most of it. The guys fought and we were sensational. The players deserve a medal after this type of performance‚” McCarthy said.

“We kept coming at them‚ out-played them‚ out-thought them and out-smarted them. But we have just one point to show for it and at this stage of the season that does not help you.”

City are now nine points behind the league leaders‚ but do have a game in hand and must still play Orlando Pirates at home in their penultimate match. McCarthy admits their title chances have now likely gone.

“For us it is about competing to stay in the top six or top eight‚” he said.

“We have to keep going‚ we have had a sensational season.

"The boys were quality throughout the season‚ we had some set-backs but overall we have been one of the best performing teams in the league‚ football-wise.

“Even with 10 men today we showed them [Highlands Park] how to play football. With a young coach who is not even two years in the job.

“Maybe some of the more experienced [PSL] coaches need to come and take a leaf out of this youngster’s book. I will give free advice‚ no charge.”