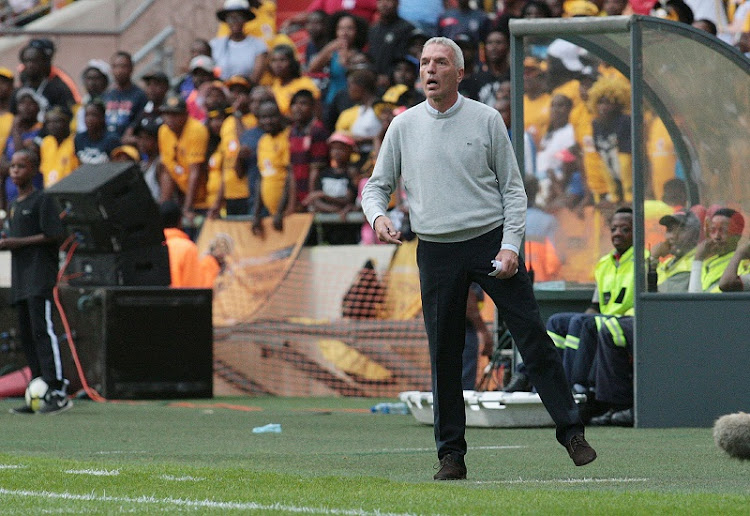 Ernst Middendorp’s regular reshuffling of his starting line-up not about not having the best team but keeping everyone on their toes.

During last weekend’s victory over Cape Town City in the last eight of the Nedbank Cup‚ the Kaizer Chiefs’ coach’s sprung another surprise in his team selection to provide tactical awareness against the dangerous Benni McCarthy side.

Middendorp had the Malagasy international Andriamirado ‘Dax’ Andrianarimanana back for only a second start in the side since his full debut in November against Black Leopards.

That move condemned Willard Katsande to the bench for a game where the Zimbabwean international’s muscle in the middle would ordinarily have been deemed necessary.

Middendorp‚ who remains on course to break the club’s almost four season trophy drought‚ explained that he didn’t need “too much experience” for the game‚ and did not want any of his teams to be too predictable or on “auto pilot”.

The promotion of players like Happy Mashiane and Nkosingiphile Ngcobo from the Multichoice Diski Challenge (MDC) to the first team is about identifying and bringing along new talent as it is about keeping the rest of the squad on their toes.

It is also about foxing opposition coaches‚ who have already said how difficult it is to prepare against a Middendorp team because of all the changes.

“If you have too much experience on the field then you play like an automatic pilot. You are running around‚ doing routine stuff that everybody knows‚” said the Chiefs coach after Sunday’s success at the Mbombela Stadium in Nelspruit.

“You can imagine when young players come in‚ it is inspiring for each and everybody. I can see Willard‚ Bernard Parker‚ Rama (Ramahlwe Mphahlele) are being challenged.”

If you have too much experience on the field then you play like an automatic pilot.

Chiefs might have produced an efficient 2-0 win to advance to the cup semifinals but it is unlikely there will be the same line up to take on struggling Baroka FC as they return to league action at Soccer City on Saturday.

Middendorp says Chiefs could have had four or five more points from their last eight games‚ from which they had picked up 14 points and they are still in the title race.

They sit in seventh place in the standings‚ eight points adrift of leaders Mamelodi Sundowns with six games to go.

But he said Chiefs should not be judged just yet — only when they have a full strength squad back with the likes of Lebogang Manyama and Erick Mathoho returning from injury.

“Then we are capable of achieving‚” Middendorp asserted.