You know the story: Sundowns back on top but Mosimane would have preferred second place 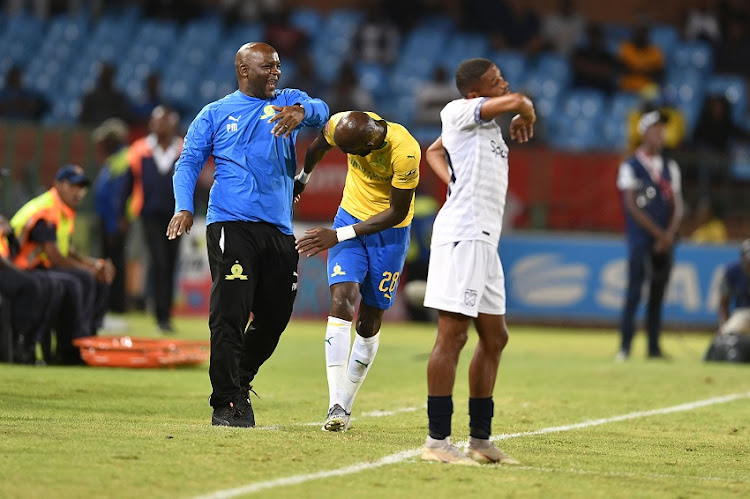 Championship-chasing Mamelodi Sundowns might have returned to the top of the premiership standings on Tuesday night but coach Pitso Mosimane says he would have happier to remain in second place.

Sundowns opened up a handy three point lead as they caught up to the rest of the chasing pack but with seven games to go‚ Mosimane is well aware that the Brazilians now have a marksman’s target centred on their back.

Tuesday’s 2-1 win over Maritzburg United was another nail-biting affair for the champions‚ who let slip a comfortable position after going 2-0 up in the first 20 minutes and ended up with their backs to the wall after Gaston Sirino was sent off and Maritzburg pulled back a goal with eight minutes left.

“It’s a long way‚ this top of the log thing can play a bit with your emotions and puts stress on the players‚” said Mosimane after the victory at the Harry Gwala Stadium.

“As I’ve always said‚ I’m happy to sit in second place but of course I wanted to win the match.

“We were top of the table for a few days and then overtaken‚ but now we are back.

“That’s why I’m giving credit to Bidvest Wits because they were top for 20 games and Pirates have also had a spell on top‚” he added.

“I prefer to come into the lead at the right time.

“In my opinion‚ it (the race for the title) will go down to the wire. It is tough league‚ that you can see.

“For us and (Orlando) Pirates‚ this Champions League this is also a distraction. Wits and Cape Town City have an opportunity to win it. Why not?

“SuperSport is also there‚ don’t write them off‚” he warned.

Sundowns and Pirates both play their last group matches in the African Champions League this weekend‚ giving Cape Town City‚ Kaizer Chiefs‚ SuperSport United and Wits the opportunity to move closer and ratchet up the pressure.

They all play on Friday night.