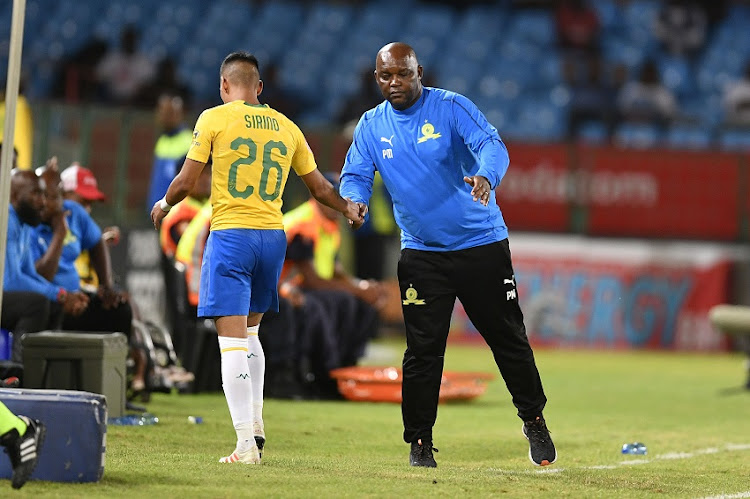 Mamelodi Sundowns coach Pitso Mosimane has warned his players to tread very carefully against Maritzburg United and avoid slipping on banana skin when the two sides meet in an Absa Premiership clash at Harry Gwala Stadium on Tuesday night.

The Brazilians‚ who booked their place in the quarterfinals of the Caf Champions League after seeing off Lobi Stars 3-0 on Saturday night‚ travel to bottom of the log United looking to assume ownership of the premiership summit and go three points clear at the top of the pile.

On the flip side of the coin‚ the People’s Team are desperate for the maximum points that would move the struggling side from the foot of the table.

Mosimane said playing against sides that are stranded in the relegation zone is always dangerous.

“Whenever you are playing against a group of players who are fighting for their lives is the most dangerous thing you can face‚” said a cautious Mosimane.

“But at the same time they can make mistakes because of their desperate situation where they will be under pressure to win.

"Maybe we can get something out of their situation because they may be prone to making mistakes.

"What we need to do is to tread carefully‚ treat them with respect and know that they need a win more than us.”

Sundowns have only managed one win in their last five league matches during an underwhelming run that also includes three draws and one loss.

Mosimane said they must dig deep to get all the three points.

“If we really want to be on top of the log‚ we have to win there‚" he said.

"These are the games that we must play to catch up with everybody on the log and they have always given us problems.

"We want to go to Wydad Casablanca with confidence and but it is going to be a difficult game and we must respect them.

"Maritzburg is always an entertaining whenever we are there to play them and I think we are playing them at the wrong time.

"I could have played them whilst they are on a low but I expect them to have more heart and we will have to match their hunger‚” he said.