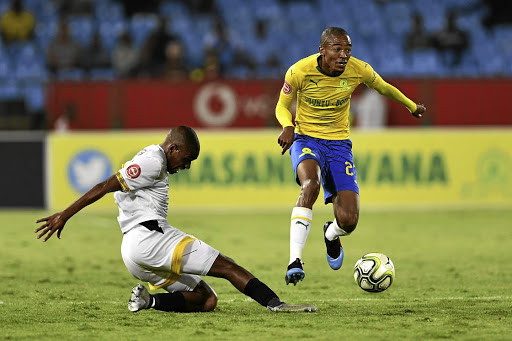 Thapelo Morena of Mamelodi Sundowns appears to be paying the price for being good in different positions. /Lefty Shivambu/Gallo Images

Playing many positions at his club Mamelodi Sundowns seems to be continually costing Thapelo Morena a berth in Bafana Bafana.

When, on Monday, Bafana Bafana coach Stuart Baxter announced his squad for the all-important Africa Cup of Nations qualifier against Libya in Tunisia on March 24, some had hoped that Morena would be included in the team.

But the Brit strangely opted for one natural right-back in Cape Town City skipper Thamsanqa Mkhize.

It's only at this position that Baxter selected just one player, perhaps banking on the fact that his captain Thulani Hlatshwayo can also play as a wing-back.

Mamelodi Sundowns reserve their best for the Caf Champions League.
Sport
3 years ago

Morena himself is not primarily a right-back. Naturally, the 25-year-old is a winger, but when he joined the Brazilians from Bloemfontein Celtic in August 2016 Sundowns mentor Pitso Mosimane changed his role and moulded him into one of the most effective right-backs in the league.

Substantiating his versatility, the lad from Randfontein on the West Rand, scored his only league goal this campaign when he operated as a centre-forward in Sundowns' 2-1 victory away to Highlands Park in January this year.

The Sundowns workhorse has just five Bafana caps under his belt. In the past Baxter preferred the likes of Kaizer Chiefs' pair of Reeve Frosler (while he was still at Bidvest Wits) and Ramahlwe Mphahlele in that right-back position.

After a spate of omissions, Baxter had called-up Morena for Bafana's back-to-back Afcon qualifiers against Seychelles in October last year, but the former Celtic utility man withdrew from the squad after suffering a quad muscle strain while warming up for their league clash against Wits, six days before the Bafana duty.

Ever since that unfortunate quad injury, Morena has not been called up to Bafana again. He won the last three of his five national team caps in the 2015 Cosafa Cup. To qualify for Afcon, SA only need to avoid a defeat against Libya.