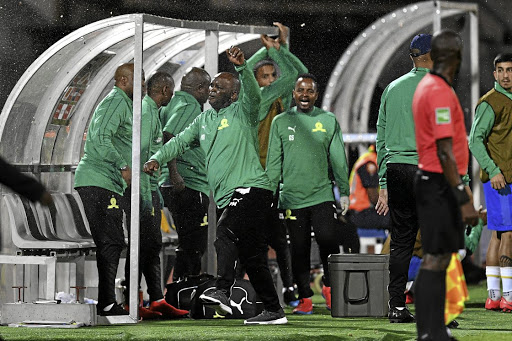 The Mamelodi Sundowns bench erupts with joy folloing a goal against Lobi Stars in Atteridgeville on Saturday. /Lefty Shivambu

Before playing their final CAF Champions League group match this weekend, Mamelodi Sundowns will be looking to get their ducks in a row in the domestic league.

The Brazilians could take an outright lead in the Absa Premiership with a positive result against Maritzburg United tonight (7.30pm).

The relegation-threatened Maritzburg face the difficult task of overcoming one of the best sides in the league.

Time is running out for the Team of Choice in their battle for survival after they suffered a 1-0 loss to Kaizer Chiefs at the weekend. They remain bottom of the table with 17 points from 23 games.

Sundowns are jointly top of the standings with Orlando Pirates with 40 points, but the latter have no league match this week after their match with Black Leopards was rescheduled.

Fiery Mamelodi Sundowns coach Pitso Mosimane says the treatment that is often reserved for South African sides on the continent is unacceptable and ...
Sport
3 years ago

The 2016 Champions League winners face Moroccan side Wydad Casablanca in Rabat on Saturday.

The defending champions reportedly declined an offer from the Premier Soccer League (PSL) to postpone their match with Maritzburg to March 29.

The club felt that the proposed new date at the end of the month would be too close to the first-leg quarterfinals set for April 5.

"We would have loved to travel to Casablanca and have the whole week to prepare for them but it was not to be," Mosimane said.

"Obviously, the Maritzburg game means we will have two days to prepare for Wydad, so we are in a difficult situation.

"In any competition, even the World Cup or Cup of Nations, 11 points is usually enough to qualify from the group.