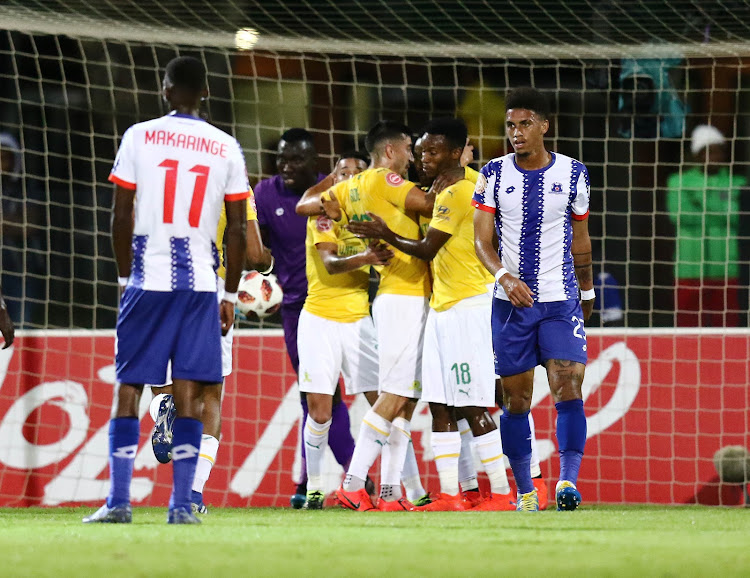 Emiliano Tade scored early and Lebohang Maboe netted against his old club as 10-man Mamelodi Sundowns went top of the Absa Premiership table again on Tuesday, winning their catch up game against bottom placed Maritzburg United to open up a three point lead.

The 2-1 victory at the Harry Gwala Stadium in Pietermaritzburg means Sundowns are now comfortably placed to retain their title, sitting above Orlando Pirates and the rest of the chasing pack.

Maritzburg remain bottom with only six games left, although they gave a good account of themselves even if the gulf in quality between the two sides was all too obvious at times.

Fortune Makaringe reduced the deficit with eight minutes to go to set up a grandstand finish but Sundowns held out despite playing the last 30 minutes with one man short after Gaston Sirino was sent off.

Maboe set Tade up for the opener after only five minutes as he struck powerfully from the edge of the area with the defenders backing off.

Sirino beat the offside trap to set up the second goal in the 21st minute, running onto a ball over the top from skipper Hlompho Kekana before hitting the ball square for Maboe to score.

It meant Maritzburg had to make a change to try and get back into the game and coach Eric Tinkler took off defender Rushine de Reuck to throw on Yannick Zakri just minutes later.

It almost paid immediate dividends as Sundowns keeper Denis Onyango was forced to make a series of saves to keep his side’s lead intact.

First there was a double save to deny Makaringe and then a super stop to deny Zakri’s header as Maritzburg gamely tried to get back into the contest.

Onyango was again in the right place in the 33rd minute to push a shot from Zakri just wide but, at the other end, Themba Zwane could have made it 3-0 just before half-time but missed from close range, albeit under some pressure after getting goal-side of defender Nazeer Allie.

After the break, Maritzburg continued their effort, adding Deolin Mekoa to their attack and seeing Makaringe’s effort well saved by Onyango just on the hour mark.

Then Sirino got sent off – picking up a yellow card for delaying play at a throw in and then making a gesture to referee Victor Gomes, who took offence, produced a second yellow and sent the Uruguayan for an early shower.

That put Sundowns on the back foot for the last half-hour but they were able to ride it out to emphasise their strong championship credentials.

The Premier Soccer League (PSL) has pushed back the penultimate block of fixtures for the season due to the general national elections.
Sport
3 years ago
Next Article