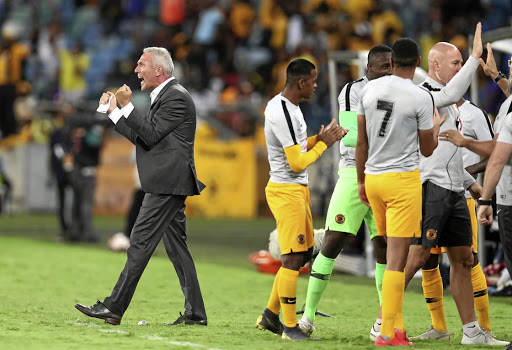 Nothing is more important to Kaizer Chiefs coach Ernst Middendorp than maximum points to ensure a strong finish to their 2018/19 campaign.

Middendorp was speaking after their 3-2 win over Highlands Park at Moses Mabhida Stadium at the weekend. When asked about their chances of winning the league, he still said the focus is on the next match.

Bernard Parker, Leonardo Castro and Dumisani Zuma were on the scoresheet for Amakhosi, while Bevan Fransman and Lesenya Ramoraka replied for the Lions of the North.

"In the games remaining, we have to fight for points.

"The points are what count at this moment and not being popular to sit after a game and say, 'we played nice, but unfortunately [we didn't win]'. I think we have to change a little bit of our approach and that's what counts, the three points. We are preparing for the next game," he said.

But for Chiefs to stand a chance at league honours, they'll have to start keeping clean sheets. In the last five matches, they've kept one, which was against amateurs The Magic in the Nedbank Cup.

Middendorp said his job is to prepare the team to play at its full potential.

"Soccer is so unpredictable and that's the nice part about the game," he said.

It's work in progress and Middendorp is confident Chiefs will be better in future.

He hinted that there's a lot of activity behind the scenes by management to prepare the team for next season and finish this campaign strongly.

"With a good pre-season and with a good decision now - I think there's a lot of behind- closed-door [activities] going on in this brand of Kaizer Chiefs to take the right decisions to go the right way, that's the one part."