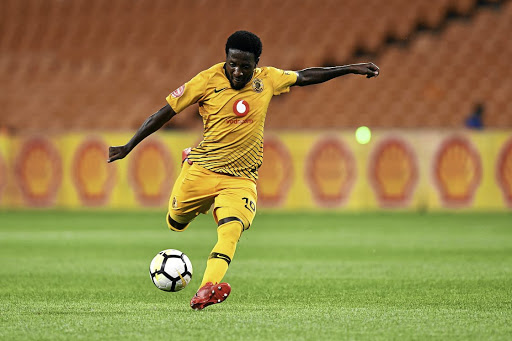 So much was expected of midfielder Siphelele Ntshangase by Kaizer Chiefs supporters when he arrived at the club a year ago, but he's aware there is more that he still needs to do.

Affectionately known as "Stash", Ntshangase has been in and out of the team. Before yesterday's match against Highlands Park at Moses Mabhida Stadium, he had managed 19 appearances across all competitions this season.

Ntshangase's focus is on doing enough to impress coach Ernst Middendorp to play regularly and return to the form he enjoyed at Black Leopards and briefly at Baroka, before his switch to Amakhosi in January 2018.

"It's obvious that I would need to play regularly (to be in top form) and the confidence will go up," Ntshangase said.

"It's all about time and as time goes, it'll show," he continued.

"We do have one-on-ones with the coach and he tells me where I need to improve. The most important thing is that I must not lose the ball."

Naturally an attacking player, the Pongola, KwaZulu-Natal-born player, has at times played in a more defensive role.

Ntshangase, however, said he's ready to play wherever the coach feels he would be more effective.

"As a player, you are not born for a specific position and if the coach feels you have to play in another position, because he sees your qualities, you have to adjust to that. With any position, I'm happy," he said.

"I can't make promises, but what I can tell you is that I know my responsibility.

"But the most important thing is that this is not about me and it's about the team as a collective," he added.