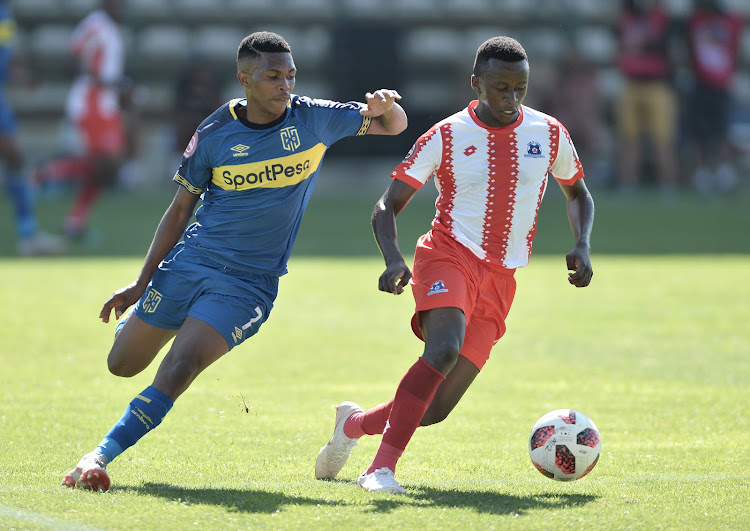 Gift Links scored a superb goal as Cape Town City kept up their streak of hot form and piled more misery on bottom club Maritzburg United with a 3-2 victory in their Absa Premiership clash at the Athlone Stadium on Saturday.

Captain Thami Khize put City ahead early on but Maritzburg found an equaliser with a rare foray forward just past the hour-mark when Mxolisi Kunene netted.

Links showed superb technique to fire his side into the lead, before Riyaad Norodien added a third and the game looked safe.

United set up a grandstand finish though when Fortune Makaringe crashed the ball home with six minutes remaining, though they could not steal a point at the end.

City are next in action on Wednesday when they travel to Mamelodi Sundowns for another massive clash in the title race. Maritzburg host AmaZulu on Friday.

Kermit Erasmus struck the post early on following a fine run into the box, with the rebound eluding the City attackers in the box.

City were dominant in the opening stages and deservedly took the lead after seven minutes when Mkhize turned home a corner with his chest to score his third goal in five games.

City took their lead into the halftime break and continued to press after the interval, but United found an equaliser out of nothing on 62 minutes with their first shot on goal, Kunene played in behind the defence and slipping the ball past home goalkeeper Peter Leeuwenburgh.

But City regained the lead when Maritzburg coughed up possession in the midfield and Teko Modise set Links on goal, the young winger drilling the ball into the bottom corner of the net.

Substitute Norodien looked to have sealed the points when he saw his deflected shot beat Ofori, but United midfielder Makaringe set up a nervous finish when he crashed the ball home from 10 yards.

Maritzburg defender Rushine de Reuck received a second yellow card deep in injury-time, and a fight ensued as he walked down the tunnel with both benches getting involved and forcing a stop in the game before peace was restored.