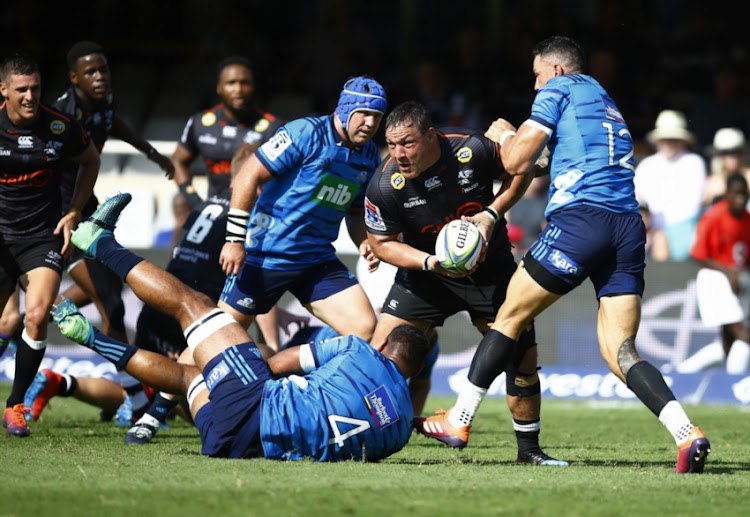 The Sharks registered a gutsy 26-7 bonus point win over the Blues at King’s Park in Durban on Saturday afternoon for their second Super Rugby win in succession.

As a result of this victory where they scored four tries, the Sharks have moved to the top of the South African conference with 10 points but it does not get any easier as they welcome the Stormers on Saturday.

On the other hand, the Blues, who only managed one try under the heat and humidity of KwaZulu Natal, have a daunting trip to the Jaguares at the Estadio José Amalfitani in Buenos Aires where they will be looking for their first win of the season.

The first try was scored by Aphelele Fassi who touched down despite attention from Blues defenders after he was released by an offload from winger Makazole Mapimpi in the eight minute.

It did not take the Sharks too long to increase their advantage as Akker van der Merwe powered home over the try line for the second try of the afternoon after they worked out a brilliant lineout and driving maul.

Sharks suffered an injury blow on the half hour mark when Springboks winger Sbu Nkosi was stretched off the field with a neck injury after he collided with a team mate and he was replaced by Curwin Bosch.

After 36 minutes, Sharks pulled away further when Robert du Preez dummied his way past the Blues defence to touch down under the poles as they increased their lead to 19-0 which they took to the half time break.

Sharks, who had a number of disciplinary issues in the second half, failed to score two quick tries inside six minutes after the restart where Bosch and Andre André Esterhuizen fluffed their lines.

In the 55th minute, Blues thought they scored their first try of the match through Otere Black but TMO intervened and it was disallowed due to obstruction as the small Durban crowd continued to wait for points of the second half.

The first points of the second half finally arrived after the hour mark when the Sharks defence was exposed for sloppiness by debutant Tanielu Tele’a as the Blues tried to exploits mistakes of their hosts.

Pressure was beginning to tell for the Sharks and Ruan Botha shown yellow for slowing down the ball after 68 minutes but the hosts did not allow their numerical disadvantage to affect them as Bosch put the match beyond doubt on the stroke of full-time.