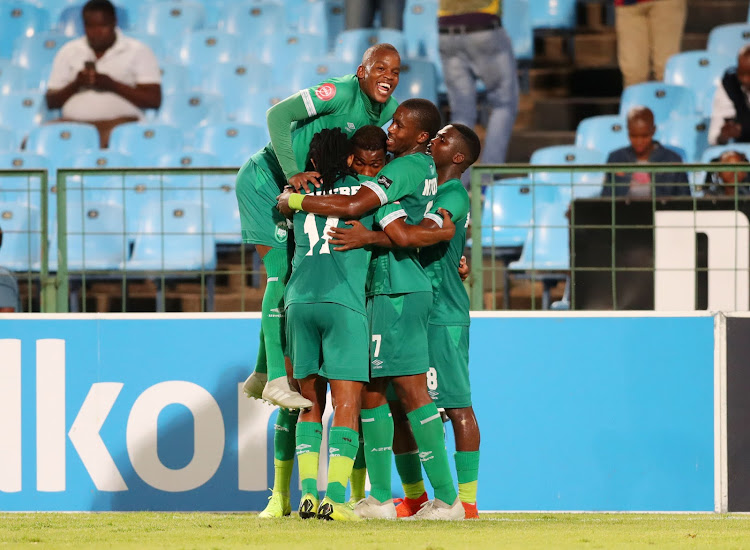 Zimbabwean midfield maestro Ovidy Karuru celebrates with his AmaZulu teammates after scoring the second goal in a 2-0 Absa Premiership win away over champions Mamelodi Sundowns at Loftus on Tuesday January 29 2019.
Image: Samuel Shivambu/BackpagePix

Mamelodi Sundowns missed out on an opportunity to go top of the Absa Premiership standings after they were stunned 2-0 by spirited AmaZulu on Wednesday night at Loftus Versfeld.

The Brazilians went into this game needing a win by at least two goals to overtake Bidvest Wits at the summit on goal difference but they were left frustrated by Usuthu who improved their position to 11th spot.

It was the first defeat for Sundowns in the league this season but coach Pitso Mosimane will take comfort from knowledge that log-leaders Wits and second-placed Orlando Pirates have played two games more than them.

With this crucial three home points having been forfeited, Mosimane's team will turn their attention to the Caf Champions League as they host Asec Mimosas from the Ivory Coast at Lucas Moripe Stadium on Friday night.

It is a game that the Brazilians will have to win to enhance their chances of progressing to the semi-final stages of the continental competition and they will be boosted by the fact that they recently beat rivals Wydad Casablanca.

For AmaZulu, who secured this victory through an own goal from Tebogo Langerman in the first half and a header by Ovidy Kakuru after the break, they have a break of ten days before their next league match against Cape Town City at King Zwelithini.

In the game, the first notable chance of the opening exchanges came for Sundowns skipper Hlompho Kekana whose close range shot bounced off AmaZulu goalkeeper Siyabonga Mbatha before it was cleared off for safety by his defender.

The Brazilians were on the attack again after a few minutes but the alert Mbatha proved the difference as he moved out of his line to block Lebohang Maboe’s low shot from close range with the ball deflecting for a corner kick.

AmaZulu opened the scoring when Langerman beat his own goalkeeper Denis Onyango in a desperate attempt to clear a cross by Bonginkosi Ntuli just after the half hour mark in what was the first real chance of the match for the visitors.

Five minutes from the half time break, Mbatha was at his best again as he produced acrobatics to parry a thunderous free-kick by Kekana from the edge of the box for safety and ensured that they went to half time with the lead.

AmaZulu ensured the three points in the bag after 64 minutes when Zimbabwean international Karuru rose above everyone inside the box to head home a well-taken corner kick from Jabulani Ncobeni.

In the second half, a section of the Sundowns supporters started shouting at the players as they wasted numerous chances that could have put AmaZulu under pressure.

Former Mamelodi Sundowns striker Toni Silva‚ sold to Al-Ittihad in Egypt this month after an unsuccessful half-season at the Brazilians‚ has launched ...
Sport
2 years ago

It's a week of 'must-win' matches for Sundowns coach Mosimane