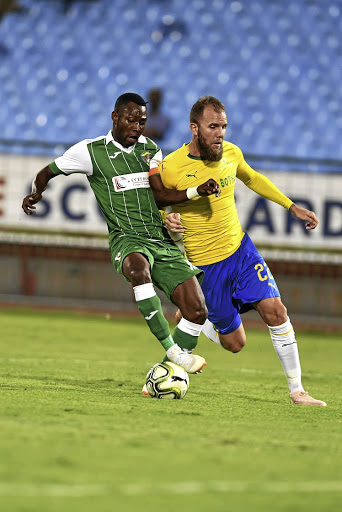 Jeremy Brockie, in yellow, and his Mamelodi Sundowns teammates are looking to qualify for the group stage of the CAF Champions League should they beat Ahli Benghazi of Libya. /Lefty Shivambu/Gallo Images

As Mamelodi Sundowns prepare to take on Ahli Benghazi of Libya, the former African kings will go out with the aim of giving a boost indirectly to Bafana Bafana.

The Brazilians have advanced to the second round of the preliminary stages of the CAF Champions League after a 7-1 aggregate win over Leones Vegetarianos.

In the next stage, starting next weekend, they will take on the Libyan club in Egypt (due to war in Libya) in the first-leg.

Bafana could benefit from that fixture as the South Africans will square-off in a do-or-die match in March against Libya in the qualifiers for the 2019 Africa Cup of Nations.

Sundowns coach Pitso Mosimane wants to give Bafana a taste of that feel-good factor with a positive result against the Libyans.

"Now we are going to play the Libyan team and we need to win that game to show that we can go to Libya and win with Bafana," Mosimane said.

"They have many Libya national team players and it's up to the boys to bring confidence to the country for Bafana. It's an important game on this issue to show that it's possible."

Jeremy Brockie on target as Sundowns make a meal of Vegetarianos

When they drew a team from Equatorial-Guinea in the preliminary round of the Caf Champions League, Mamelodi Sundowns coach Pitso Mosimane bemoaned ...
Sport
3 years ago

The 2016 Champions League champions are looking to qualify for the group stages of the tournament for a fourth consecutive year.

Days before they travel to North Africa, the Tshwane giants will take on Baroka in the league on Tuesday night. Mosimane wants the team to travel that very same evening after the match in Atteridgeville.

"It's not going to be easy because we have the Baroka game and it's a thorn in the flesh. If we can find a flight then we must travel that same night and be in Cairo the next day," he said.

SA have three teams, Sundowns, Orlando Pirates and Kaizer Chiefs, remaining in CAF competition after Free State Stars were dumped out of the Confederation Cup.

Sundowns and Pirates are flying the flag in the Champions League while Chiefs are in the second-tier Confed Cup.

Pirates overcame Light Stars of Seychelles by 8-2 on aggregate while Chiefs beat
Zinamoto from Zanzibar 5-2 of aggregate.