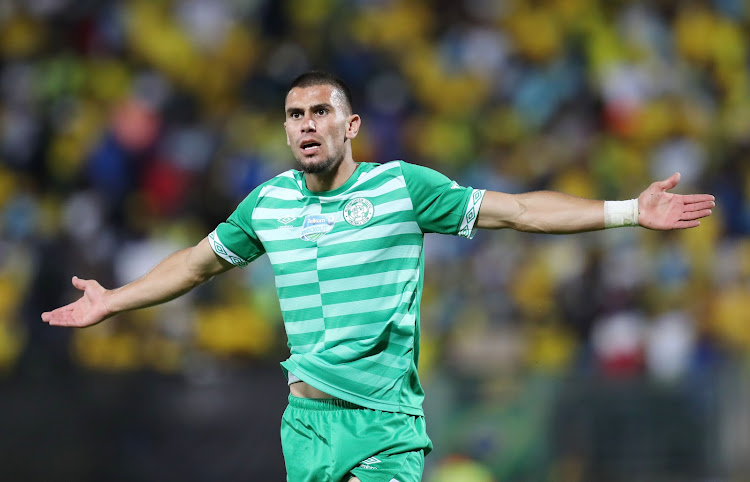 Lorenzo Gordinho will leave Bloemfontein Celtic and return back to his club Kaizer Chiefs after the end of his loan spell.
Image: Muzi Ntombela/BackpagePix

Lorenzo Gordinho will make his much-anticipated return to Kaizer Chiefs in two-and-a-half weeks‚ and the centreback’s intermediary‚ Mike Makaab‚ says the player is raring for his return to Naturena.

Gordinho had requested from Bloemfontein Celtic to return to Amakhosi from his one-year loan six months early in June.

However‚ the player was too much part of then new Celtic coach Steve Komphela’s plans and the Free State team were not budging‚ despite concerted efforts by Makaab and Chiefs to dislodge Gordinho back to Amakhosi.

Now‚ as Chiefs embark under a new dawn under a new head coach in Ernst Middendorp‚ who replaced the uncertain Giovanni Solinas on Friday‚ the Soweto giants will be pleased to have Gordinho arriving back in January to bolster an at times shaky central defence.

Makaab confirmed on Wednesday that Gordinho’s loan spell at Celtic ends on December 31.

“Correct – he’s going back to Kaizer Chiefs‚” he said.

Celtic will be the one party out of Gordinho‚ Chiefs and themselves‚ not pleased by the defender’s return to Naturena.

The centreback has been an ever-present in central defence‚ starting all 12 league games‚ plus five cup matches‚ for Phunya Sele Sele‚ and key performer in Celtic being unexpectedly in fifth place in the Absa Premiership.

However it is highly unlikely Celtic – where owner Max Tshabalala’s financial problems have been well documented‚ as he has unsuccessfully put the club up for sale – will make any form of offer to buy Gordinho outright.

Makaab confirmed no offer had come so far.

“Nothing as yet‚ as far as I understand. So as it stands now he’ll be on his way back to Chiefs‚” he said.

While Gordinho had wanted out of troubled Celtic five months ago‚ the 2017-18 season has gone surprisingly well‚ and the 24-year-old will arrive back at Chiefs a far more confident and accomplished centreback.

“Listen‚ he’s been very happy at Celtic‚ but he certainly does want to go back to Chiefs‚” Makaab emphasised.

Under Solinas‚ none of Daniel Cardoso‚ Teenage Hadebe‚ Mario Booysen or Mulomowandau Mathoho were able to establish a consistent central defensive partnership for Amakhosi.

Mobile and intelligent‚ Gordinho is likely to be just the sort of centreback Middendorp will be looking for in that troublesome department.

Bloemfonetin Celtic are in discussions with Kaizer Chiefs about Lorenzo Gordinho potentially going back to Amakhosi early.
Sport
3 years ago

Kaizer Chiefs have recalled Lorenzo Gordinho from his loan at Bloemfontein Celtic.
Sport
3 years ago
Next Article