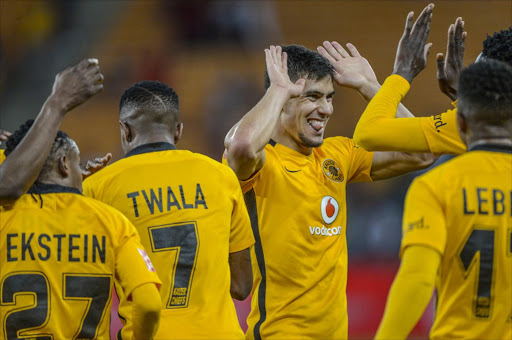 File photo of Lorenzo Gordinho of Kaizer Chiefs joined by teammate to celebrate his goal during the Absa Premiership match between Kaizer Chiefs and Maritzburg United at FNB Stadium on September 24, 2016.
Image: Sydney Seshibedi/Gallo Images

Bloemfonetin Celtic are in discussions with Kaizer Chiefs about Lorenzo Gordinho potentially going back to Amakhosi early from his loan‚ but for now they are firm that the player is staying put‚ Celtic CEO Khumbulani Konco has said.

Kaizer Chiefs on Thursday sent a letter to Celtic requesting the return of Gordinho early from his loan to Phunya Sele Sele.

Konco‚ though‚ said‚ with no clause in the year-long loan that started in January‚ Celtic are standing firm that they will retain the centreback until the end of the year.

“Basically two clubs will agree in a loan agreement that if a club needs to recall the player‚ they will give a certain notice. That’s a clause that they can include in a contract‚” Konco said on Friday morning.

“If they have such a clause then they are within their rights to recall the player.

“So now‚ if there is no clause then you work on the relationship basis.

“If both clubs need the boy then it becomes difficult.

“So now‚ basically‚ Chiefs have requested him back and there is a discussion happening between the two teams.

“But the initial answer is still‚ now‚ we want to keep him.

“There is a discussion between the two teams with regards the player. And we’ll see how far it goes. But for now he’s still going to play for Celtic.”

Chiefs’ football manager Bobby Motaung told the publication on Thursday that a letter had been dispatched to Celtic‚ alerting them that Amakhosi coach Giovanni Solinas wanted the defender back at Naturena with immediate effect.